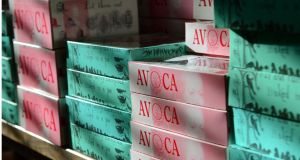 Avoca Handweavers, the family-owned retail and cafes business that looks set to be sold to US giant Aramark, boosted profits last year by 70 per cent, as Irish consumers emerged from their recessionary bunkers to buy more luxury goods.

The group recorded a rise in sales of €1 million to almost €59 million in the year to the end of Jnauary 2015, while net profits rose from €1.3 million to €2.2 million. It has retained profits on its balance sheet of some €21 million.

The company vastly improved its cashflow management and squeezed costs during the year despite rising sales, a common move among businesses that are readying themselves for sale.

The accounts, which were signed off on May 29th, acknowledge the business is in sale talks after receiving “several” inquiries.

Avoca, which operates cafes and luxury goods retail stores from 11 locations in Ireland, is owned by the family of former solicitor Donald Pratt, who founded the group as a textiles operation in the 1970s.

It is now run by Donald’s son, Simon Pratt, and is owned by Donald and his wife and their four children.

The group is in exclusive talks with Aramark, the contract catering and building services company, to sell the business. The talks are at an advanced stage. The potential sale price is not yet known, but is likely to top €50 million if the properties are included.

Aramark declined to comment on Wednesday while Simon Pratt had not yet to respond to a call requesting comment on the accounts and the sale talks.

Mr Pratt has previously spoken of not wanting to pass the business on to the next generation of the Pratt family. He has not ruled out staying on to run the business for Aramark, however.

The local arm of the US giant has little experience running a business of this type, although it could try to leverage the brand to exploit it outside Ireland, perhaps in the US.