Andy McCue favours focus on ‘organic growth’ rather than acquisition 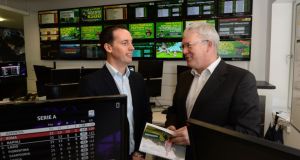 During Patrick Kennedy’s stewardship the group grew by expanding into new markets, most notably Australia, which was once again a star performer for the business in 2014, growing operating profits by 68 per cent to €52.4 million. It also established partnerships with the French State-owned Pari Mutuel betting company and British Columbian lottery in Canada.

However, Italy, which it entered in 2012, has been less successful. McCue noted last year’s gross income from the business was 2 per cent down. “We’re undertaking a strategic review of the opportunity which will allow us to better position ourselves for this new reality,” he said.

He would not be drawn on whether this would see it shut down the operation.

It was the only black spot on the 2014 results. McCue is leaning more towards expanding its strong market positions in Ireland, Britain and Australia, by focusing on “organic growth over acquisition”.

this springs from two things: that the company has been unable to identify suitable acquisitions and that it has the resources to develop new betting products to drive organic growth.

The focus will be internet over betting shops, and on mobile over desktop. McCue said its customers will see the results of its efforts coming through over the next year in the shape of more gambling products, more betting markets and differentiated gaming software.

Meanwhile, next week the company will step up its usual push for new customers at the Cheltenham festival by offering two, rather than the traditional one, opening-day “money- back” specials.

With leading Irish trainer Willie Mullins sending an unusually strong team of horses, the festival could give McCue his first big headache.