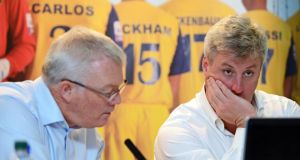 Analysts trimmed their forecasts for Paddy Power yesterday after the listed bookie warned poor foreign exchange rates could knock €4 million off full-year profits and reported it has suffered a run of unfavourable sports results in the last two months.

Paddy Power said yesterday pretax profits increased 12 per cent to €77 million in the first six months of the year, driven by strong growth in its online businesses, while earnings per share rose 13 per cent to 137.1 cent.

Net revenues grew 21 per cent to €379.8 million during the first half, from €315.1 million in the comparable six months last year. Chief executive Patrick Kennedy said the growth came from all channels.

Mr Kennedy said the second half started well and predicted that despite poor recent sports results, the firm would achieve low- to mid-double-digit growth in constant currency in 2013. However, the company predicted in a second-half trading update that if the weakness in the Australian dollar is maintained, it would reduce 2013 operating profit by €4 million.

The currency has fallen against the euro since May on fears the country’s mining boom is ending and its property market is displaying the warning signs of a bubble.

Paddy Power’s Australian business, Sportingbet, contributed €16.5 million to the group’s €75.4 million operating profit during the first half of the year. Mr Kennedy said the firm is confident of the underlying strength of business there.

“If you compare growth rates, you will see that Sportingbet grew 30 per cent, William Hill was actually down 6 per cent, Tab was up 11 per cent and Lex was up 8 per cent,” he said. “So we are growing proportionately stronger . . .”

The prediction on currency weakness combined with results at key race meetings such as Galway and events such as Wimbledon were likely to reduce winnings from punters by €15 million in the second half sparked a near 6 per cent fall in its share price to €56.50 in early trade in Dublin. However, the stock was just 0.4 per cent down at €59.83 at the close.

Analysts responded by cutting back on forecast earnings for the group for the full year.

David Jennings and Simon McGrotty said the group’s first-half figures were marginally behind their predictions.

They pointed out the firm is guiding earnings growth of 6-11 per cent for the year, which implies €151 million for 2013. “That compares with our previous forecast of €165 million. That implies an 8.5 per cent downgrade for this year.”

Gavin Kelleher, analyst with Paddy Power’s broker, Goodbody, said he expected full-year 2013 consensus to came down by about 5 per cent. However, he said these were not structural and should not come as a surprise, given what the group’s rivals have reported. Both firms pointed out Paddy Power is a fundamentally strong business.

Online betting tax
The group is facing increased costs in the Republic and UK as both bring in legislation to extend betting tax online. Chief financial officer Cormac McCarthy said they would have cost the group €23.5 million during the first half.

Mr Kennedy said a number of factors would mitigate their impact once they are introduced, including growth in market share as smaller operators pull out. Its Irish and British online business was the biggest contributor to operating profit at €42 million, a 17 per cent increase on last year.