Over 50 jobs lost as Austins retailer in Derry closes doors 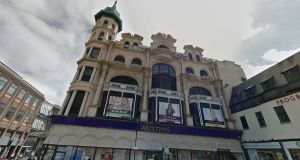 Austins has been suffering a decline in sales for almost 20 years due to a combination of competition from online shopping and currency fluctuations between the euro and sterling. File photograph: Google Street View

Austins of the Diamond in Derry, thought to be the oldest independently owned retail store in the world, closed its doors to the public on Tuesday with the loss of 53 jobs.

The business, which started as a drapery store in 1830, had been suffering a decline in sales for almost 20 years due to a combination of competition from online shopping and currency fluctuations between the euro and sterling.

The business was purchased from the Austin family by the Hasson family 50 years ago.

In November 2014, the City Hotel Group bought the four-storey premises situated at the junction of the Diamond and Ferryquay Street for a six-figure sum.

The retail element of the company was restructured and traded under the name of Hassonzender Limited, but on Tuesday morning the company’s directors, together with Ronan Duffy of McCambridge Duffy Insolvency Practitioners, announced the immediate closure of the store during a meeting with the 53 employees.

Austins fashion buyer Toni McNally, who started working at the store as a 14-year-old trainee, said it was a highly emotional meeting and described the closure as like a death in the family.

“Generations of the same families worked in the department store. We all loved working there. It was one big family sharing the good times and bad times with each other.

“This has come as a bolt out of the blue and it is devastating news - not just for us but for the entire city centre,” she said.

Mr Duffy said it was a very sad day for the employees and the Hasson family - and the closure showed the types of pressures independent retailers were under.

“This proves no one is immune from these difficulties. The Hasson family had previous difficulties and they restructured their affairs several years ago - but it has not proven to have been enough.

“It was a shock to the staff this morning when they were addressed by management and by myself, and I can tell you it was a highly emotional meeting.

“Our priority is to deal with the employees because they too are creditors and my staff will meet with them this week to process their redundancy claims and any holiday monies they are due.

“It will be a very painful process for many of them. This company was not an insignificant employer in the city centre and many of the staff have worked there for all of their adult lives.

“Some of them were in shock, some in less shock at this morning’s meeting and they likened it to a family bereavement.

“Since the building was bought in 2014, the company has traded as a tenant in the building. The building is owned by others and it will be up to the landlord as to what will happen to the building.

“I am aware some people have bought gift vouchers and put down deposits on items.

“Funds for those have been ring-fenced and all credit notes and vouchers will be refunded. There is a wide range of creditors who will be dealt with,” Mr Duffy added.

City centre manager Jim Roddy said the euro-sterling exchange rate over the November and Christmas period and earlier this year had resulted in many shoppers from Derry buying their goods in Co Donegal.

“This closure today has come as a massive shock to me and to many many people in this city.