New charge will not be passed directly on to customers 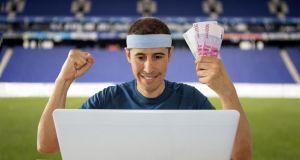 Bookmakers will have to pay a 1 per cent tax on all on-line bets placed in the Republic from August 1st under new legislation brought into force on Wednesday.

Bookmakers will have to pay a 1 per cent tax on all on-line bets placed in the Republic from August 1st under new legislation brought into force on Wednesday.

The Minister for Finance, Michael Noonan, has made orders bringing the Betting (Amdendment) Act, 2015 and a number of other new laws governing bookmaking, into force.

The Betting (Amendment) Act requires on-line bookmakers will have to pay 1 per cent tax on all wagers placed in the Republic.

Under the same legislation, betting exchanges, which match clients who want to bet on a particular result with those offering odds against it, will pay 15 per cent of the commission they charge.

Traditional bookie shops already pay the 1 per cent tax, which is not passed on to customers, but the levy was not applied to on-line betting.

The Republic’s horse and greyhound racing and breeding industries are likely to welcome the move.

They have been lobbying for betting tax to be extended to on-line bookmakers for several years. They also want a link between the tax and State funding for both sectors restored.

The leading players in the Irish market, Paddy Power, Boylesports, Ladbroke’s and Betfair, have all said that they will pay the tax.

They have also warned that it should be enforced across the board to ensure a level playing field.

Publicly-quoted Paddy Power recently estimated that the introduction of an Irish on-line betting tax would have cost it an extra €8 million last year.