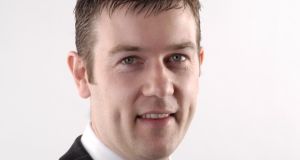 Micheál McArdle: “Ireland is in a very positive position at the moment and there are a couple of things driving that, such as the UK coming out of recession ahead of us.”

Like many Irish businesses, the Co Louth-based logistics firm McArdle Skeath started small. Over the past 47 years, however, it has grown to become one of the most successful companies in the northeast, thanks in part to its ability to move with the times.

Established by Michael McArdle in 1968, the company specialises in transportation, refrigeration and storage. It employs 80 people at a 20,000-pallet storage facility in Callanberg, near Dundalk, where it has a fleet of 40 trucks and more than 100 trailers.

McArdle Skeath is well known among exporters for providing integrated logistics solutions for the food, pharmaceutical and dry goods sectors throughout Ireland, Britain and Europe, but it originally began as a one-man operation.

“My father Michael started off working as a wage clerk at RA Burke Shipping at Dublin Port, but set up the company, which was originally known as McArdle Transport, after he spotted an opportunity to transport goods between his home town area of Enniskeane, Co Cork, and Dublin” says son Micheál, who serves as the firm’s general manager. “He started out with just one truck and the business evolved slowly from there. Dad got a tipping truck at one point, but then moved on from that to container work in and around the country.

“This remained the company’s focus for many years, but following the oil crisis and the recession of the early 1980s, he decided he had to expand into continental Europe in order to survive,” he adds.

In addition to expanding into transportation work outside Ireland, the company also sought to ensure it would stay in business by diversifying into new sectors. It did this primarily through the acquisition of Skeath Transport in 2008, a specialist in food and pharmaceutical distribution.

The companies were run as separate entities until 2012 when the decision was taken to amalgamate the businesses and rebrand as McArdle Skeath.

“In the end,” he adds, “ it was a relatively straightforward process because the companies were so alike. Our thought processes mirrored each other so that made things easy because we were speaking the same language and had a similar ethos and culture.”

The company also took big steps to ensure it developed its business further by attaining accreditations and approvals from a large number of regulatory bodies, including the Department of Transport; the Health Products Regulatory Authority; the Department of Agriculture; the National Standards Authority of Ireland, and even the US Food and Drug Administration.

“We’re audited by the same people who audit our clients and I think this brings a good understanding of the pressures they face and the goals they’re trying to fulfil.” McArdle says. “I’d say the main difference between us and our competitors comes down to the compliance ethos we have.”

While the company has successfully expanded over the years, McArdle is the first to admit that, as with other organisations, it did not escape unscathed from the recession.

“Nonetheless, it did double its warehousing capacity from 2008 to 2013 by targeting specific industry segments that were still performing well. We’re quite a diverse company with clients in every type of industry, so we’re a good barometer of who’s progressing well and who is struggling.

“Before the recession, there were quite a lot of high-value consumer goods coming into the country. This ceased virtually overnight and that impacted on us. We were lucky enough to be in so many areas that we were able to grow and sustain our business during the downturn.”

While his father is still in charge, it is very much a family business, with Micheál and three other siblings involved.

“We have our individual roles to play, but are all very clear on each of the responsibilities which brings clarity and a real co-ordinated team effort to everything we do,” he says. “We also have external management team members as well, which is great because it is good to get guidance from outside the immediate family.”

With Ireland’s export sector performing well, the company is optimistic about the future. “Ireland is in a very positive position at the moment and there are a couple of things driving that, such as the UK coming out of recession ahead of us. This has had a positive impact on Irish companies as has the decision by the EU to embark on quantitative easing. This should help boost exports further. As a firm that operates in the sector, we’re hopeful that we’ll benefit on the back of this.”