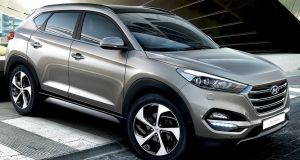 Hyundai is the best-selling new car brand on the Irish market this year, with the Tucson being the most popular model on the market last month

Hyundai finished the month as the best-selling brand with 5,062 registrations, ahead of Toyota with 4,852. Ford took third place with 4,383 but Volkswagen has slipped down to fourth with 3,748. The German brand, at the centre of an emissions scandal since last September, previously led the Irish car market for several years.

Of the rest, Nissan takes fifth place with Renault in sixth and Skoda - another brand in the VW Group - slipping to seventh.

Hyundai’s Tucson was also the best-selling model for the all-important first month of the new 161 registration plate, well ahead of the Ford Focus in second place and the Volkswagen Golf in third.

According to Stephen Gleeson, managing director of Hyundai Ireland, a strong order bank for February suggests the Korean brand will retain its lead, but with global demand strong and factories operating at capacity levels supply might become an issue later in the year and that may limit the brand’s ability to finish the year on top.

In the premium segment Audi finished January ahead of BMW, despite trailing it for most of the month.

With economic recovery taking hold, only four brands recorded a drop in sales: Citroen, Subaru, Seat and Porsche, the last two members of the VW Group.

There was strong activity towards the end of the month in the car hire market, with 1,714 vehicles registered for hire drives. Renault, Volkswagen, Seat, Skoda and Audi were the most active brands in this sector.

Diesel remains the most popular engine type with 69.3 per cent of sales, but that is down from nearly 72 per cent last year. There has been a slight pick up in petrol sales, rising to 28.9 per cent of the market. Electric cars sales have fallen back, with just 50 sold last month compared to 115 for January last year, but this may be accounted for in the growth in sales of plug-in hybrids models, recording 619 registrations last month compared to 358 for the same time last year.