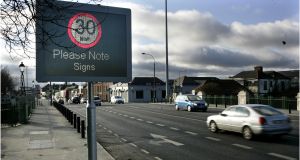 More than two-thirds (68 per cent) of motorists support the introduction of 30km/h speed limits in city centre areas.

The annual 123.ie car review survey of nearly 4,000 motorists, found large-scale support for plans to lower limits in residential areas. Plans for the phasing in of such limits throughout Dublin city and suburbs were approved by the city council in December, despite opposition from AA Ireland.

The 30km/h limit will apply on almost all roads and streets as far as the council’s boundary with the four other Dublin local authorities, excluding “arterial” roads.

The bylaws were made available for public consultation earlier this year and 550 submissions were received with about 170 opposed to the imposition of 30km/h limits.

AA Ireland has described the widespread application of the 30km/h limit as “absurd” and having the potential to undermine road safety. As part of the bylaw consultation process, the AA sought to increase limits on larger access routes to the city, including parts of the city centre which have had a 30km/h limit since 2011.

The 30km/h bylaws will be introduced in phases from next March. Under the first phase, the limit will be extended west of the current city centre 30km/h zone to cover most of the streets between the Royal and Grand canals.

The next phase, scheduled for introduction in May 2017, will cover suburbs such as Sandymount, Crumlin, Drimnagh, Raheny and parts of Cabra, Phibsborough, Coolock, Glasnevin and Drumcondra.

Under the final phase, the implementation date of which has yet to be determined, the limit will be extended to the remaining suburbs from the city council border.

The cost of implementing the first two phases is expected to be €350,000.

The 123.ie survey also found motorists blame the soaring costs of car insurance on firms attempting to recoup losses incurred in recent years. Over 85 per cent of motorists said their premiums have increased in the past 12 months, and 62 per cent said they had increased by more than 20 per cent.

Some 25.1 per cent of motorists said their insurance costs had increased by 20-29 per cent, while 12 per cent said their premiums had soared by 50 per cent or more.

Asked to rate reasons for the increase, motorists laid most of the blame on insurer recouping losses, followed by an increase in fraudulent claims, higher settlement costs, and insurance firms being run badly.

Meanwhile, a slight majority of drivers (51 per cent) also said they would not feel safe sharing the road with a self-driving car, and two-thirds said they would feel frightened about travelling in an autonomous vehicle.

Does the language around Covid-19 help or hinder us?
Real news has value SUBSCRIBE