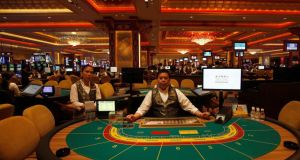 Croupiers sit in front of gaming tables inside a casino in Macau. October is set to be the worst month on record for casino revenues in the world’s biggest gambling hub Macau. Photograph: REUTERS/Tyrone Siu

Sometimes it seemed like Lady Luck was going to keep smiling forever on the baize tables of Macau, but the ongoing corruption crackdown, democracy protests in Hong Kong and declining tourist numbers combined to give Macau’s casino industry its worst monthly revenue performance on record in October.

Total casino revenue in the world’s biggest gambling hub fell 23.2 per cent to 28 billion patacas (€2.8 billion) last month, the fifth month in a row they had dropped, according to Macau’s Gaming Inspection and Co-ordination Bureau.

Over the past two years, Macau has expanded hugely, overtaking Las Vegas in revenue by seven times. The former Portuguese colony is the only place where casino gambling is legal in China.

The days when Chinese high rollers, some of them corrupt local officials, would come to Macau to flash the cash, look over as President Xi Jinping’s two-year crackdown on graft has rung changes and signalled the end of showy extravagance. Mr Xi is due to visit Macau next month and that might also have dragged on sentiment.

Revenue from VIP high rollers accounted for just 56 per cent of the total in the third quarter, also a record low.

Steve Wynn, chief executive of Wynn Macau, which is building a $4 billion integrated resort in Macau, was as philosophical as you would expect a gaming magnate to be.

“I don’t know if it is a squall or if we are in the rainy season, or how long it will last, but we are still very bullish on Macau,” he said in an earnings call.

The big casino operators are building eight new casino resorts in the coming three years, as they hope to try and shift revenues away from just gaming into more traditional tourism.

Macau’s slowest annual growth in casino revenue was in 2009, when it grew by 9.7 per cent, and there hasn’t been a yearly decline since records began in 2002.

Central government policy from Beijing against corruption “has put a lot of the wealthy businessmen in the foxholes”, said Mr Wynn.

Many visitors to Macau come via Hong Kong, which is one hour by high-speed ferry away, but the democracy protests in the city led China to restrict access to the territory, and that has affected numbers heading to Macau.

It will also be interesting to see what impact a ban on smoking in the casinos, introduced in October, will have. The sight of a gambler smoking and drinking tea is a trademark of many of the Macau tables.