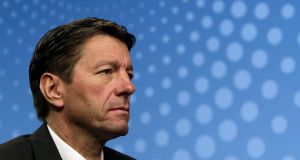 For all the buzz in recent months surrounding Kasper Rorsted’s next move, his switch of top jobs from Dial soap-maker Henkel to sneaker-outfitter Adidas still caught investors off guard.

That’s because Henkel initially didn’t explain his move, which comes with almost two years still to go on his employment contract. To boot, the 53-year-old Dane had said as recently as November that he wanted to stick around.

And going from one CEO post to another on Germany’s clubby DAX Index is virtually unheard of. Henkel’s loss was Adidas’ gain, with the stock shooting up as much as 12 per cent Monday as investors imagined Rorsted working some of the same magic at Adidas that he employed to boost sales and profit margins at Henkel, a 140-year-old company that’s twice the size of Rorsted’s new home in terms of market value.

Henkel, meanwhile, slumped 4.1 per cent, a rude welcome for incoming CEO Hans Van Bylen. Rorsted “has an almost cult-like following to the extent that we would suggest that some investors were less invested in Henkel and more in him,” Exane BNP Paribas analyst Jeff Stent wrote in a note. Rorsted brings brand-building chops, deal-making savvy and a willingness to cut costs to counter headwinds like currency swings. His push into North America with brands such as Persil detergent and Schwarzkopf shampoo was key to Henkel’s strategy to catch some of the company’s biggest competitors in the consumer goods market.

Henkel’s share price more than tripled during his tenure, with only one other company on Germany’s benchmark DAX Index besting its stock performance over the period. “In terms of business execution his results were very strong and served as a strategic guarantor to the market,” Fabio Fazzari, analyst at Equita, said by telephone. Rorsted’s main challenge now will be to close the gap in both market share and profitability with industry leader Nike, while fending off newer competitors like Under Armour.

Adidas held just 4.5 per cent of the American footwear market last year through November, down from 5.2 per cent a year earlier, according to market researcher NPD Group. Nike widened its share during that period to 58.6 per cent. For Henkel investors, their dismay stemmed in part from the view that Rorsted’s departure will diminish the likelihood that the maker of shampoos and industrial glues carries out a large acquisition in the near future.

Rorsted missed out on improving Henkel’s shampoo and hair dye offering in North America when Procter and Gamble Co. opted in July to sell for $12.5 billion a raft of beauty brands including Wella and CoverGirl to Coty Inc. instead of Henkel. Disappointment over the failed prospect was compounded by a slowdown in China that has curbed demand for industrial glues, which are used in packaging. “While not impossible, a material M&A move from Henkel now looks considerably less likely,” according to Exane’s Stent. Also weighing on Henkel’s post-Rorsted prospects is the fact that its management team is, like the new CEO, veterans of the company and so lack outside experience.

That’s typical for DAX companies, where executives are groomed from within. Some companies have hired senior managers from rivals, like ThyssenKrupp’s Heinrich Hiesinger, who joined from Siemens, but none have been of Rorsted’s caliber. Henkel’s new CEO Van Bylen, who’s been with Henkel since 1984, will outline a new strategy at the end of the year, but analysts don’t expect to be bowled over. “The November strategy seminar may well underwhelm,” Stent said.