pretax loss was £3.8 million in the six months to May 19th 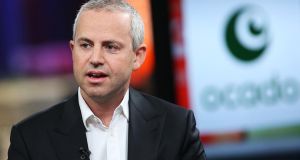 The pretax loss was £3.8 million in the six months to May 19th, said Ocado yesterday. That compared with a profit of £181,000 a year earlier.

Excluding one-time items, the loss was £1 million, just over half the average of analysts’ projection. Revenue increased 16 per cent to £355.9 million.

As well as operating its own online food-delivery service, Ocado is trying to license its warehouse-processing and web technology to domestic and foreign retailers.

The company has a grocery-exclusive deal with Morrison and is free to form joint ventures with grocers outside the UK. – (Bloomberg)