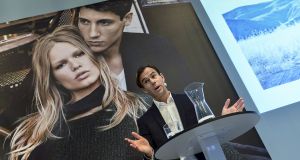 H&M said it would expand its online shopping service to nine more market, including Ireland, in the next financial year.

The company, which will offer online shopping in 23 markets this year, has been slower to roll out ecommerce compared to bigger rival Inditex.

H&M reported a sales rebound in September after hot late summer weather hit August trading and said the strong U. dollar had affected its purchasing costs into the fourth quarter.

Last week, the fashion retailer had reported its weakest monthly sales growth in more than two years for August, which H&M said was due to unseasonably warm weather in its main European markets.

“When the weather became more normal in September, sales took off again,” chief executive Karl-Johan Persson said in a statement.

The world’s second-biggest fashion retailer said sales from September 1st to September 22nd rose 12 per cent in local currencies, up from a rise of just 1 per cent in August.

Last week, rival Inditex reported a brisk start to the autumn season, with sales in local currencies in the six weeks to September 10th up 16 per cent.

H&M shares dropped 1.7 per cent by 1042 GMT, slightly underperforming a 1.3 per cent slide in the STOXX Europe 600 Retail Index. Its shares had already underperformed Inditex and the broader sector over the past month.

H&M’s gross margin fell to 55.9 per cent in the third quarter from 58.3 per cent a year ago, largely due to the strong US dollar pushing up purchasing costs but also due to increased discounting, particularly in August.

Inditex reported a gross margin of 58.1 per cent for the February to July period.

In June, H&M had said it expected the strong dollar to lead to a rise in purchasing or sourcing costs this year. The retailer buys most of its clothes in Asia on US dollar contracts while selling most of them in Europe. It is more exposed to dollar strength than Inditex.

The Swedish company’s pretax profit was largely unchanged at 6.94 billion crowns in the June to August quarter from a year earlier compared to a mean forecast in a Reuters poll of analysts for 6.93 billion.

It also reiterated plans to open about 400 new stores this year, including 240 it expects to open in the fourth quarter, almost three new stores a day.

Mr Persson said new H&M beauty products launched recently in around 700 stores in 28 markets and online had got off to a good start and a roll-out was planned to a further 14 markets soon.

1 How can I view my dead brother’s will if I’m not the executor?
2 Provisional liquidator appointed to Dublin engineering firm
3 Bursting of Tesla bubble a case of ‘not if, but when’
4 Bank of Ireland staff in line for 2.95% pay increase
5 Finance Ireland’s IPO, Huawei and Irish 5G, and pay rises at Bank of Ireland
6 US reiterates opposition to Huawei equipment being used for Irish 5G
7 How to . . . move (almost) everything to your new phone
8 Big tech gains aren’t ‘extraordinary’ after all
9 Ben Dunne objects to revised plan for new Premier Inn hotel in Dublin
10 Broadband firm challenges decision over next-generation standards
Real news has value SUBSCRIBE