Gucci’s top two executives to step down from luxury label 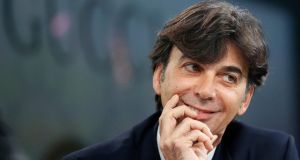 Gucci’s top two executives will step down from the luxury label as owner Kering seeks to revive growth at its faltering flagship luxury brand.

The shakeup is the brand’s biggest since the 2004 departure of duo Domenico de Sole and Tom Ford, who were widely credited with reviving the storied brand from a loss-making family company to a global fashion house.

More recently, Gucci has struggled as customers switch to labels they perceive to be more exclusive, with sales falling in the most recent quarter.

Gucci “will benefit from new ideas and fresh energy,” said Luca Solca, an analyst at Exane BNP Paribas in London. “The key to stay relevant in luxury goods is continuing reinvention.”

Kering’s shares fell 1.2 per cent in Paris trading, paring the gains this year to 2.2 per cent and giving the company a market value of about €20 billion. Bizzarri, who heads Kering’s luxury-couture and leather- goods division, will replace Di Marco on January 1, the Paris-based company said today in a statement.

A successor to Giannini will be named later. Di Marco joined Gucci in 2009 from Kering’s Bottega Veneta brand. He sought to move Gucci up-market by reducing the use of the label’s famous double G logo and re-introducing classic styles in luxurious materials. Giannini had led Gucci’s creative team since 2006.

Bizzarri joined Kering in 2005 as chief executive of Stella McCartney. He replaced Di Marco at Bottega Veneta in 2009 and was named head of Kering’s couture and leather goods division in April.

“Bizzarri is a proven team builder and a very good manager,” Solca said. “He could take over the great work Patrizio had done at BV, and bring the brand to new heights. I expect he is setting himself up to do the same at Gucci.”

Kering has been overhauling management of its luxury brands. In October, the Paris-based company named new CEOs at Bottega Veneta, Brioni and Christopher Kane.

Kering chief executive Francois-Henri Pinault will oversee the company’s luxury couture and leather-goods division until a replacement is named. Of Bizzarri, Pinault said: “I am fully confident that he will now build on Gucci’s extraordinary legacy to have the 93- year-old house enter a new momentum and continue to write bright chapters of its exceptional history.”