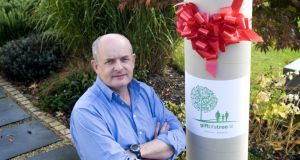 Landscaping and horticulture group SAP first began to feel the effects of the downturn in 2007. At the time, the company had a workforce of more than 200 people, and was bringing in €17 million a year. Its paving business alone was generating a turnover of almost €13 million a year. However, with the property market turning sour, the company quickly realised it needed to diversify away from paving and its reliance on the construction sector.

SAP Landscapes managing director Geoff Moran said the paving business was directed towards building sites, and with more and more developers going into liquidation, the company made the decision to close it down.

“We could do €100,000 worth of work and then the people might go into liquidation. There were times we did get burned. We suffered big debts.

“One of the ways we dealt with the property crash was by restricting our construction activity and relationship with contractors. There were an awful lot of bad debts in the industry so we reduced our exposure to that.”

The company decided to instead focus on its landscape-maintenance business, and after spotting a gap in the market for a dedicated winter-maintenance service, is now one of the largest private winter services contractors in Ireland.

“We increased our maintenance business which involved grounds management, grass cutting, looking after parks, and introduced a road-sweeping business. That [road sweeping] now brings in a turnover of €160,000 annually.”

“We also focused on providing winter maintenance such as snow ploughing. We had always done this for a few key customers but expanded the service. We were lucky in that we had two hard winters in 2009 and 2010. They were a catalyst for us to invest in this area. We got a lot of new customers.”

The company invested €1 million in new machinery and now operates a fleet of snow ploughs and salt-spreading machines to keep business premises ice-free through winter.

“Our winter maintenance business runs from November to the end of March. We provide a daily forecasting service, which we communicate to our customers. We will send a salting crew to their site if there is a frost forecast.”

The SAP group was established in Co Kildare in 1971, at a time when the majority of plant and shrub material was imported and there were no significant commercial nurseries. Since then, the company has grown into Ireland’s largest supplier of trees, shrubs and landscaping services, employing more than 175 people. It now comprises SAP Nurseries, SAP Landscapes, SAP Grounds Maintenance and SAP Holland.

“The business was a solid business in the early ’90s. It wasn’t high-tech, and the nurseries weren’t as developed as they are now. We now export Irish produce and Irish plants. We exported trees to Russia last year, and we also export to the UK, France and Italy as a standard,” Moran says.

In 2010, the group went online with the establishment of e-SAP. The website provides wholesale customers with access to 35,000 trees, plant and shrub lines, real-time availability and a choice of specification according to the client’s budget. The site is the first portal in Europe to offer the trade buyer real-time choice and availability.

Moran says the move towards exporting followed a decline in the nursery business as a result of reduced consumer spending and a dramatic fall-off in building of new homes. SAP Nurseries supplies trees to nurseries in the UK, Latvia, Poland, France, Holland, Belgium and Germany.

The company counts the K Club, the Four Seasons Hotel in Ballsbridge, Dublin, and the Ritz Carlton Hotel in Powerscourt, Co Wicklow, among its impressive customer list.

“We did all the landscaping for the Dún Laoghaire and Heritage golf clubs. We planted the trees on O’Connell Street. We did the landscaping around the Four Seasons Hotel.”

As for the future, things are looking up according to Moran: “A few months ago we started work on a new residential scheme. It is our first new residential project since 2009. Maybe that’s a signal of the end of the recession.”