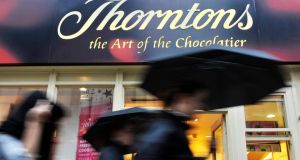 Thorntons has become something of a joke in the City for its repeated profit warnings, its failure to sell eggs at Easter or boxed chocolates at Christmas and its constant complaints about the weather being too hot or too cold – or sometimes both. Photograph: EPA

The takeover of a famous British name by an overseas bidder is usually greeted with a chorus of complaints about the erosion of the nation’s industrial heritage, accompanied by calls for greater protection for domestic businesses against predatory foreign buyers.

But in the case of chocolate manufacturer Thorntons, target of a £112 million bid from the Italian Ferrero group, the reaction has been entirely different. This week’s 145p a share offer has been warmly welcomed, with key shareholders and board members past and present rushing to sell their shares to the bidder.

As Ferrero launched its offer, the family-owned Italian firm revealed it had already bought up a 29.9 per cent stake and had received acceptances from holders of a further 10 per cent or so. It should have no trouble mopping up the rest of the shares as the board has given its “unanimous recommendation” to the terms.

The favourable reception afforded to Ferrero speaks volumes about the current state of the 104-year-old Thorntons business, one of the few remaining British chocolate brands of any real scale.

The company has become something of a joke in the City for its repeated profit warnings, its failure to sell eggs at Easter or boxed chocolates at Christmas and its constant complaints about the weather being too hot or too cold – or sometimes both.

Its brand has become tarnished in recent years as management pushed more sales through supermarkets. Newer, classier rivals such as Hotel Chocolat have overtaken it with more upmarket, tastier and innovative ranges, leaving Thorntons with the nickname “Motel Chocolat”.

Thorntons has just lost another chief executive following another profit warning and, while its shares surged by more than 40 per cent on news of the Ferrero deal, matching the offer terms at around 145p, they are still only half the level they were in the 1990s.

The takeover by Ferrero is seen as Thorntons’ last chance to get its business onto a sound footing. The Italian company, which says it has “long admired” Thorntons, plans to retain and develop the brand and keep Thorntons’ manufacturing plant in Alfreton, Derbyshire, where 1,500 of its 3,500-strong workforce are employed.

It has been less forthcoming about its plans for Thorntons’ struggling chain of shops, which is already in the process of being slimmed down. While it may decide to sell some of its existing brands through the Thorntons chain, significant store closures – and job losses – look to be a distinct possibility.

***** Andy Hornby has kept a low profile since his disastrous reign as chief executive of HBOS, which had to be rescued by Lloyds – and billions of pounds of taxpayers’ money – at the height of the financial crisis.

If merger talks between betting group Ladbrokes and rival Gala Coral come to fruition, the former banking executive will once again enter the public arena as a key executive in a listed company.

After the collapse of HBOS, Hornby became chief executive at Alliance Boots, then owned by private equity giant KKR.

However, he quit unexpectedly two years later, saying he needed to “take a break” from corporate life.

Just three months later, in 2011, he emerged as head of Coral, the bookmaking business that is part of the private equity-owned bingo to betting group Gala Coral.

A merger of the two businesses would create Britain’s biggest betting shops chain and substantially strengthen its online operation.

Assuming he stays, it would also catapult Hornby back into the corporate limelight, something investors who suffered huge losses on their banking shares might well be unhappy about.

The timing of a potential Ladbrokes/Coral deal could also prove tricky for Hornby, as the City is still awaiting publication of the regulatory report into the HBOS collapse. It will not make comfortable reading for the forming banking boss.