Daimler, BMW and VW implicated as politicians react with horror to news of trials 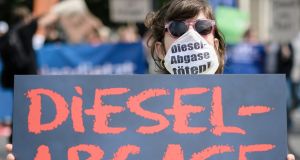 A protester with a sign reading Diesel-Abgase Toeten! (Diesel Emissions Kill) at the ministry of transport in Berlin. Reports of experiments with diesel pollutants on animals and people have caused horror in German political circles. Photograph: Clemens Bilan/EPA

Dieselgate has revved back into life with revelations that German car manufacturers carried out medical tests on humans using exhaust fumes.

After reports on Friday of US tests on macaque monkeys, politicians in Berlin reacted with horror to news on Monday that tests to examine the health effects of diesel exhaust fumes were also carried out in the western city of Aachen on human test subjects.

The tests were commissioned by an industry-funded lobby group, and took place in 2013, according to the Stuttgarter Zeitung daily.

The experiments focused on “short-term nitrogen-dioxide inhalation by healthy people”, according to the newspaper. Doctors at an Aachen-based university hospital then examined 25 people after they inhaled varying concentrations of the gas over several hours.

Germany’s federal government said on Monday the tests were “in no way ethically justifiable”. Acting chancellor Angela Merkel condemned the tests on as “justified by nothing”.

Acting federal environment minister Barbara Hendricks said later on Monday she was “horrified” by tests she described as “disgusting”.

“The fact that an entire industry has apparently tried to conceal brazen and dubious methods of scientific research makes it even more monstrous.”

Behind the tests was the European Research Group on Environment and Health in the Transport Sector (EUGT) – a since defunct organisation funded by German car giants Daimler, BMW and Volkswagen Group.

More than two years after the original Dieselgate scandal – and revelations that German car companies manipulated exhaust software to meet environmental limits – all three car companies rushed to distance themselves from the medical tests they financed.

Volkswagen chief executive Matthias Müller condemned the tests as “wrong, unethical and disgusting”. VW supervisory board Hans Dieter Pötsch said that “whoever is responsible for this will of course take the consequences”.

Daimler, owner of the Mercedes-Benz car brand, said it was “shocked by the extent of those studies, and the way there were carried out”.

“We strongly condemn the tests,” the company said, insisting it was not involved in choosing testing methods that were “against Daimler’s values and ethical principles”.

One German researcher involved, Prof Ulrich Keil of the University of Münster, said on Monday he felt “shitty in hindsight” at having worked on studies the EUGT used to make the case for “clean” diesel technology.

It remains unclear just how scientifically robust the tests were, with serious questions about the method, the test period and whether the car used in the test was a manipulated vehicle or not.

On Monday the ethical aspect of the tests has dominated the headlines given that no experiments can take place on animals or humans in Germany without permission from an authorised ethics committee.

According to the reports, the ethics committee at Aachen University Hospital permitted the tests under occupational doctor Prof Thomas Kraus. He said the 25 health volunteers were exposed to nitrogen-dioxide for three hours to measure the effects of pollutants in the workplace. “None of them had any negative effects,” Prof Kraus told Germany’s DPA news agency on Monday.

The test result stands in contrast to long-term medical studies drawing a link between nitrogen-dioxide and breathing problems, particularly among the young, the elderly and asthmatics.

News of the medical test in Germany has awakened uncomfortable memories of the Third Reich.

Before the Nazis killed millions of European Jews, Sinti and Roma, and homosexuals in concentration camp gas chambers with Zyklon B, they murdered many thousands of people with mental and physical handicaps using exhaust fumes in specially adapted trucks.

Thus headlines like “VW gases humans” has a terrible ring to it in German ears, particularly for Stephan Weil, state premiere of Lower Saxony, a shareholder in the German car company with Nazi origins.

“Everything must be done now to establish under whose orders and when these tests were carried out,” said Mr Weill, who is on the supervisory board.

On Friday the New York Times reported how the same EUGT organisation financed tests in the US in which cynomolgus macaque monkeys were exposed to emissions from a diesel VW Beetle. It has since emerged that the model used in the test was among those with cheat software to reduce emissions in test situations.

Amid the latest scandal, a Bavarian district court opened a legal case that could end in a ban on diesel cars in inner Munich city. The court heard from environment groups that, despite efforts by city authorities and car companies to tackle emissions levels, nitrogen-dioxide levels in the Bavarian capital remain almost twice the EU limit of 40 micrograms/m3.