No objection to move, creditors meeting to take place in August 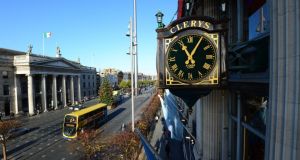 Liquidators have been formally appointed to Clery’s. Photograph: Frank Miller / The Irish Times

The High Court has confirmed the appointment of joint liquidators to the company which formerly operated Clerys department store.

There was no objection to the application.

The court also heard that in a report furnished by liquidators, they intend to establish a committee made up of the firm’s creditors, which will investigate a number of matters of concern.

Paul Gallagher SC, for the liquidators, said a creditors’ meeting would take place some time in August.

Last month, the liquidators were appointed on a provisional basis by Mr Justice Paul Gilligan after the court was told the company was balance sheet insolvent.

A short time after the appointment was made, the Dublin city centre store shut its doors for the last time.

The company, which petitioned the court for the appointment of provisional liquidators, ceased trading with the loss of more than 400 jobs.

The company directly employed 130 people. About another 330 were employed by 50 concession holders, who sold their wares in the department store and paid OCS Operations a percentage of their turnover.

At the High Court, Mr Justice Cregan said he was satisfied to confirm the liquidators’ appointment. The judge also made a number of orders including that the former directors of the company, Rafael Klotz and Malcolm Maclennan Macaulay, swear statements of affairs.

It was put on the market by its ultimate parent, Gordon Brothers, in January.

The appointments were sought after the OCS group of companies was sold to Natrium Ltd hours before the appointment of liquidators was sought.

Following the sale, Natrium removed OCS Operations from the OCS group and transferred the shares in the company (operations) to insolvency practitioner Jim Brydie, Kingsmere Road, London, for €1.

Mr Brydie and another insolvency practitioner, Brendan Cooney, after being approached by Natrium, were appointed directors of OCS Operations. The previous directors resigned.

Mr Brydie and Mr Cooney, who are separate entities from Natrium and had no involvement in the sale of OCS, then examined the company’s financial position.

OCS Operations, represented by Kelley Smith, said arising out of the examination there was no alternative other than to seek the appointment of a liquidator.

Since 2012, OCS Operations had traded at a loss and was now balance sheet insolvent. Ms Smith said that between August 2012 and January 2015, the company had lost €4.3 million. It relied on its parent, OCS Investment Holdings, for support in the form of loans.

That firm indicated it would no longer be in a position to provide any further financial support to the company.

OCS Operations operated the company on foot of a lease from OCS Properties, which expired earlier this year, and it is no longer willing to grant a new lease. OCS Operations, Ms Smith added, had no entitlement to remain on in occupation of the store.

1 State subsidises public sector retirees to cover gap until State pension
2 Who are Ireland’s 17 billionaires?
3 My father in a nursing home wants to gift me his house
4 Trump holds America up as ‘example for the world’
5 Are there annual limits on inheritances or gifts to a child?
6 Nama lends Cosgraves €15m to fund huge apartment development
7 Countries that fail to attract immigrants will lose out – Microsoft chief
8 Help, I’ve no PRSI stamps – can I still get a pension?
9 Cubic Telecom raises more than €11 million in funding
10 BP pulls out of Iraq’s giant Kirkuk oil field as plans stall
Real news has value SUBSCRIBE