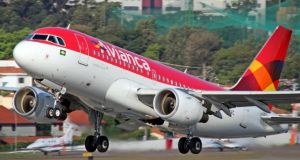 Irish aircraft-leasing company Avolon is suing Brazilian airline Avianca Brasil and its parent company for an alleged default on a lease for an Airbus jetliner, leaving more than $4 million in unpaid rent, US court documents show. Photograph: Abner Teixeira

Irish aircraft-leasing company Avolon is suing Brazilian airline Avianca Brasil and its parent company for an alleged default on a lease for an Airbus jetliner, leaving more than $4 million in unpaid rent, US court documents show.

Avolon is also suing both the airline and its parent, Synergy Aerospace for breach of contract over the two-year-old lease for an A330 jet and is seeking $5 million in damages, according to a complaint.

Dublin-based Avolon declined to comment. A spokesman for Avianca Brasil said the company was not aware of any court case and would not comment on confidential contracts. Synergy Aerospace did not immediately reply to a request for comment.

The lawsuit comes as the airline considers options for a possible international partner to help it to weather Brazil’s worst recession in decades.

Avolon is owned by China’s HNA Group, which has expressed interest in acquiring both Avianca Brasil and Panama-based sister airline Avianca Holdings, it was reported reported in June.

Both of the airlines are controlled by Bolivian-born entrepreneur German Efromovich’s Synergy Group. Delta Air Lines and United Continental Holdings are also seen as potential suitors.

Avianca Brasil’s chief executive, Frederico Pedreira, said last month that there were no clear signs of Brazilian air travel demand rebounding by the end of this year.

The lawsuit was filed on Avolon’s behalf by a bank trustee in the southern district of New York on October 14th, the same day as Avianca Brasil celebrated taking delivery of its first Airbus A320neo jet.

According to court documents, Avolon says it leased the larger and longer-range A330 jet to the airline in June 2014 for $849,000 a month in rent, plus other costs, under a 10-year contract.

“Over time, the lessee fell behind on its payment obligations under the lease,” Avolon’s complaint alleged, adding that as of October 11th, the airline owed $4.6 million plus interest.