Aldi and Lidl bring their low cost offering to the US

German discounters plan to open 1,000 US stores over next five years 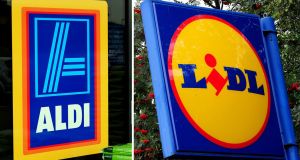 Bain predicts that sales in the so-called “deep discount segment” of the grocery business, which includes Aldi and Lidl, will grow as much as 10 per cent annually through 2020, five times higher than for traditional stores. (Photograph: PA/PA Wire)

A decades-long supermarket battle in Europe is moving to the US, adding to the competitive pressure in an industry embroiled in a deflation-fuelled price war.

Aldi, known for low prices on its private-label items, plans to spend $3.4 billion over the next five years to open 900 supermarkets, the company said Monday. The investment comes as its European discount rival, Lidl, prepares to open its first US stores this week, with plans for as many as 100 by the summer of 2018. The US expansion by the German private-label giants could put more pressure on conventional retailers like Wal-Mart Stores and Kroger to lower their prices. The new competition in the low-margin industry arrives during a deflationary spiral that has seen food prices drop for 17 straight months, the longest such streak in more than 60 years.

“There’s a tremendous amount of value at stake that will shift to Lidl and Aldi,” said Ken Knudson, a Bain and Co partner. “Traditional grocers can’t afford to lose sales right now given how competitive it is – it will be very disruptive.”

Bain predicts that sales in the so-called “deep discount segment” of the grocery business, which includes Aldi and Lidl, will grow as much as 10 per cent annually through 2020, five times higher than for traditional stores.

The battle between the two closely held grocers will intensify on Thursday, when Lidl opens nine stores in three states. Analysts have estimated that it could roll out as many as 600 US locations over the next five years.

Aldi says it will have 2,500 stores nationwide by 2022, which would make it the third-largest supermarket chain in the US, according to the company. Only Kroger and Albertsons, which also owns Safeway, would have more.

Aldi has added more produce and boosted its organic and gluten-free offerings in recent years as it tries to appeal to more mainstream shoppers. The company has also started offering fresh fish, improved its meat selection and increased its selection of national brands, part of a bid to shed its image as strictly a low-brow discounter. Earlier this year, the company announced plans to spend $1.6 billion remodelling 1,300 of its US stores.

The arrival of Lidl this week won’t change how Aldi does business in the US, according to Liz Ruggles, a spokeswoman. “We’re doing what we’ve been doing to ensure we’re the low-cost leader,” Ruggles said. “We’ll continue to maintain that – we’re very diligent.”