€10bn merger of gambling groups could close by March 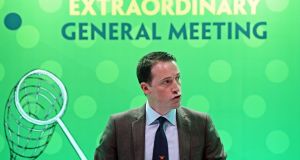 Paddy Power chief executive Andy McCue at the company’s egm on December 21st. “I cannot think of another sector that is as competitive as ours, so I would be optimistic of getting it early next year.” Photograph: Eric Luke/The Irish Times

Paddy Power chief executive Andy McCue hopes the company’s €10 billion merger with Betfair will pass remaining regulatory hurdles in time for the deal to close by the end of March.

Shareholders in both companies voted overwhelmingly in favour of the proposed transaction at separate meetings yesterday, paving the way for the creation of a global gambling business with a combined value of €10.2 billion at yesterday’s closing prices on the Dublin and London stock exchanges.

After Paddy Power shareholders had voted, Mr McCue said he was hopeful that the Republic’s Competition and Consumer Protection Commission (CCPC) would pass the transaction in time for it to go ahead by the end of the first quarter of 2016.

The commission is due to finish its phase one investigation of the proposal next month. At that point, it can either clear it or open a phase two inquiry, which could take up to 90 working days to complete.

“I cannot think of another sector that is as competitive as ours, so I would be optimistic of getting it early next year.”

The UK watchdog – the Competition and Markets Authority – cleared the proposed merger late last week one day ahead of the deadline for the end of its phase one investigation. This raised hopes that the CCPC would follow suit.

The two companies have said merging will ultimately deliver savings of €70 million a year and boost returns to their investors. They have not said if jobs will be lost in either firm as a result of the deal.

The enlarged group, Paddy Power Betfair, will have online betting businesses in Europe, the US and Australia with more than four million customers. It will own about 600 betting shops.

Investors representing more than 99 per cent of Paddy Power’s shares backed resolutions proposing the merger at the meeting in the company’s Dublin headquarters. Shortly afterwards in London, Betfair shareholders voted by a similar margin in favour. Paddy Power’s shares dipped 1.55 per cent to close at €121.10 in Dublin yesterday. Betfair’s stock was flat at 3,864 pence sterling.

Shareholders in the Irish bookie will own 52 per cent of the enlarged entity and Betfair’s owners will receive 48 per cent if the deal goes through.The new company will be be headquartered in the Republic and will have its main listing on the London Stock Exchange, with a secondary listing in Dublin.