Polarised views on minimum wage even before new commission is launched 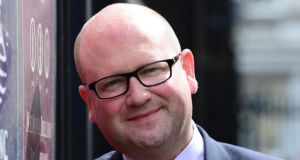 Ged Nash: he has declared that 2015 is the year of the pay rise across the economy

Before the Government’s new Low Pay Commission even held its first meeting this week, the battle lines were drawn between unions and employers on what should happen to the national minimum wage.

The commission will travel the country speaking to workers and employers, and is scheduled to make a recommendation to Minister of State for Business and Employment Ged Nash by July 15th on what changes, if any, should be made to the existing rate of €8.65 per hour.

Nash has argued that if economic conditions permit, the rate should be raised. He has declared that 2015 is the year of the pay rise across the economy.

On the other hand employers’ group Ibec said earlier this week that there was no justification for increasing the rate at the moment.

It contended it was not the role of employers to redistribute wealth, and called for the introduction of a new tax credit scheme for workers.

However, John Douglas, general secretary of the Mandate union which represents many low-paid workers in the retail sector, insisted an increase in the minimum wage was necessary.

“Ireland is a very high cost economy in terms of cost of living. The minimum wage hasn’t increased since 2007. It was set at 40 per cent of the national median wage. If that was to be applied today that would bring the minimum wage north of €10 an hour.”

At the launch of the Low Pay Commission Nash called on its nine members – who are mainly drawn from the union movement, business community and academia – to leave behind their sectoral jerseys and seek to reach an agreed outcome in the national interest.

However, given the polarised views of employers and unions, it remains to be seen if a consensus position can be achieved.

Deadlock on the commission or, worse still, the issuing of minority reports on the issue from either perspective could cause difficulties for the Government.

The commission has been given a very tight deadline for its work. The recommendations due in mid-July will feed into Cabinet discussions in advance of the budget in October. Any increase in the minimum wage would be introduced towards the end of the year or early next year when rises in public service pay are also anticipated.

If the commission misses the July 15th deadline, or turns out to be a talking shop which cannot reach an agreed conclusion, it is likely that the Government will make its own decision on a new rate for the national minimum wage.