Wine prices rocket on back of hot summer 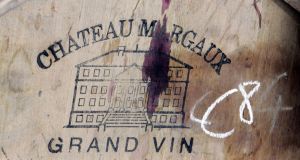 Alter Ego de Palmer, the second wine of Margaux estate Chateau Palmer, was priced at €44 a bottle, up 14.3 per cent from 2014, according to Liv-ex. (Photograph: Caroline Blumberg/Bloomberg)

Price increases for the Bordeaux 2015 vintage compared with 2014 are averaging about 15 per cent so far and in some cases have reached 20 per cent or more, often making the critically acclaimed new wines just being released to buyers the most expensive in the market since the 2010 crop.

While few of the top estates have priced their wines yet, holding back to see how the sales campaign develops, early releases have included Chateau Beychevelle, Chateau Pape Clement and Chateau Langoa Barton, according to data from the London-based Liv-ex online wine market.

An exceptionally hot June and July was followed by rain in August that helped the vines, and then favorable weather throughout the harvest gave flexibility to pick grapes at the optimum time.

After three tough vintages in Bordeaux from 2011 to 2013, and a return to a more classic style in 2014, last year’s wines have the potential to be the best since the highly rated 2009 and 2010 harvests. Focus on the new wines being sold “en primeur” before bottling damped trading in earlier vintages from the region on Liv-ex, as merchants positioned themselves to bid on wines likely to come to market later this month.

“Market participants have started to turn their attention to the 2015 en primeur releases and are hoping for prices that will generate demand,” Liv-ex said in its market blog. Chateau Beychevelle, a fourth-growth estate in Saint Julien north of the city, had its 2015 wine priced for release by Bordeaux merchants at €50.40 a bottle, 16.6 per cent up from the 2014 vintage and making it the most expensive of its wines currently available in the market since the 2011s, according to Liv-ex.

Chateau Langoa Barton, a third-growth vineyard from the same appellation, increased in price by 10.3 per cent to €32 while Chateau Pape Clement, a Pessac-Leognan estate on the southern side of the city owned by Bernard Magrez, rose 18.1 per cent to €58.80, according to Liv-ex. Both were also positioned as their most expensive vintages in the market since 2010.

Among wines that have released prices so far, Alter Ego de Palmer, the second wine of Margaux estate Chateau Palmer, was priced at €44 a bottle, up 14.3 per cent from 2014, according to Liv-ex. Chateau d’Armailhac prices increased 20 per cent to €28.80 a bottle while Chateau Clerc Milon rose 28 per cent to €43, according to Liv-ex. Both estates are owned by Baron Philippe de Rothschild SA, which controls Chateau Mouton Rothschild, and their vineyards lie close to those of the Pauillac first growth.

Among releases of Sauternes sweet white wines so far, Chateau Rieussec 2015 was priced at €42 euros a bottle, in line with its 2014, while Chateau Suduiraut prices increased 8.6 percent to €45.60, according to Liv-ex. That made the Suduiraut the most expensive of its vintages in the market over the past 10 years, and the Rieussec the most expensive since 2013.