Take charge of your bank charges 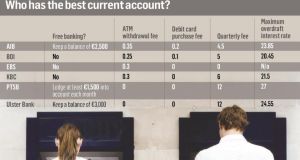 Of all the changes wrought by the financial crisis and the subsequent advent of austerity, the introduction of a broad range of banking charges may have been one of the most insidious.

Thousands of people marched against water charges, but how many of us have switched our banks in protest against paying for our day-to-day banking services?

Indeed, today it wouldn’t be unusual, for example, to expect a bill of some €40 a quarter, or €160 a year – not too dissimilar to water charges – if you don’t look to avoid some or all of the charges the banks are levying on customers.

They have become more difficult to avoid, with banks such as Bank of Ireland, and more recently AIB, increasing the age at which they offer free banking to those in their “golden years”, while others, such as Ulster Bank, have called a halt to customer incentives such as its “Your Points” credit card.

But if you’ve had enough of that €40 or so disappearing out of your account each quarter, it may be time to take some action.

Can I still get free banking?

The most pertinent question when looking for a current account is how much is it going to cost you.

The good news then is that while it may be more difficult to find – and comply with – free banking hasn’t disappeared. Yes, it is still possible to avoid all the numerous transaction charges banks are so keen to hit you with these days, but the caveat is that you must comply with a growing number of requirements.

One way of avoiding charges is to transfer a certain amount of money into your account each month. With Permanent TSB, for example, provided that a lodgement of €1,500 is made each month, quarterly fees will be waived. For many people this lodgement will equate to their pay check, which makes free banking a reasonable goal for customers of this bank.

With other banks, however, you need to keep a certain amount lodged in your account each month – money which, if you have it, could be earning more on deposit elsewhere. Ulster Bank, for example, moved from a free banking model last September to a new system, whereby to avoid charges you have to keep a minimum balance of €3,000.

With AIB, you can also avoid charges – but you need to keep €2,500 in your account every day, and if you miss a day, you will be stuck with charges.

EBS offers a combination of the above – ie you need at least €1,500 lodged to your account every month, and you also need to keep a minimum balance of €500 – but even if you do this you will only save yourself the cost of five withdrawals a month (ie €1.50).

If you’re a Bank of Ireland customer, there is no way to avoid current account fees; the only thing you can do is to try and keep them in check. The bank introduced a new fee schedule in February, which means you will pay €0.25 to withdraw money at the ATM, €0.10 for a debit card purchase and a quarterly maintenance fee of €5.

One way of reducing fees is to avoid the quarterly fee, which comes out at €20 a year. To do this you must keep a balance of €3,000 in your account.

Is it really free?

It could be argued that if you’re required to keep a certain amount of money in your current account, earning zero interest, then that requirement alone is costing you money. Take AIB’s and Ulster Bank’s minimum balance requirement. The opportunity cost of keeping this in your current account, rather than a savings account, works out at about €45 a year based on a return of 1.5 per cent. And avoiding fees depends on you maintaining this balance – get your sums wrong or face an unexpected withdrawal and you will be stuck with fees for that quarter.

PTSB, however, does pay interest on amounts of up to €1,500 at a rate of 1 per cent – which isn’t a bad deal given that you couldn’t expect to earn much more elsewhere, in this low interest rate environment.

What about the over-60s?

It used to be the case that once you hit 60 you were guaranteed fee-free banking. But then Bank of Ireland changed the goalposts, and now you have to be 66 to avail of benefits such as no quarterly current account transaction fees; no overdraft facility fee; and free contactless payments.

Where one bank goes, others tend to follow. AIB, for example, also increased its age as of March 1st, and you now have to be 66 to be able to avail of its Advantage Account, which gives you free banking and foreign exchange services. It’s understood that existing customers, between the ages of 60 and 66, have been allowed retain their free banking privileges since AIB made the change.

Ulster Bank will still allow you to get free banking once you turn 60, as do KBC and Permanent TSB.

What offers do I get by switching?

If you are in the market for switching, banks are increasingly offering incentives to try and attract your business – if you’re a good customer who isn’t inclined to bounce cheques or incur unauthorised overdrafts of course.

KBC, for example, allows you to avoid ATM charges by giving you free cashbacks on instore purchases. If you have a KBC current account, you’ll also get 0.2 per cent off a new mortgage with the bank. While it might not sound a lot, it can add up.

What you can no longer expect to get, however, is a rewards card with your new account, with many banks and financial services providers cutting back such services.

Ulster Bank, for example, said at the end of last month that it will no longer offer customers of its credit card to collect reward points towards a host of services including flights with EasyJet and shopping with Dunnes Stores and Argos.

It’s understood that the bank is stopping its YourPoints credit card rewards scheme because of the introduction of EU regulation earlier this year capping interchange fees.

If you want a credit card that offers rewards, your best options now include KBC’s card, which offers 1 per cent cash back on grocery and online purchases. If you sign up for the card before July 31st, you’ll get 4 per cent back for the first three months.

Another option is from Tesco, which gives you a reward back in the form of extra clubcard points, which you can then put towards purchases in the grocery chain.

Watch out for other fees

But it’s not all about daily banking fees. The ones that can really hurt are charges for services you might reasonably expect to be free.

If you need a duplicate statement, for example, perhaps to fulfil a mortgage request, it will cost you €3.80 for the first page, and €2.50 for each page thereafter with BoI. Or how about getting a lost card replaced (€6 at KBC), or a bounced cheque (€10 at PTSB).

You can get a bit of flexibility on your current account, to help you get through those days close to the end of the month or if you’re waiting for money to come in, but it will cost you.

With AIB, for example, you’ll pay €25.39 each time you set up an overdraft facility, as well as interest at 11.85 per cent on the amount you borrow. This can turn a €500 overdraft into about €534.68 to be repaid if you’re overdrawn for 60 days. If you go overdrawn without permission, you’ll face an interest charge of 23.85 per cent.

At Ulster Bank, you’ll face a heftier 15.55 per cent interest rate on overdrafts, as well as €25 set-up charge, and 9 per cent surcharge on unauthorised transactions.

Permanent TSB has the highest interest rate charge for unauthorised overdrafts, at 27 per cent.

What about a credit union?

It’s been talked about a lot, but credit unions across the country have yet to move into the current account space. However, there has been some progress towards offering credit union customers a broader service, and the competition such a move would bring would be welcome.

Some 77 credit unions are linked up with an electronic payments infrastructure through their own company called CUSOP, and, according to a spokeswoman for the Irish League of Credit Unions, this number should grow by a further 25 or so by the end of 2015.

“It is planned that by the end of 2016 up to 200 credit unions across the country will have this service available to them,” she says.

While not quite a current account, credit unions signed up to CUSOP can provide electronic payments to any bank account with a valid BIC and IBAN across 33 countries in Europe and beyond.

And fully-fledged current accounts could be on the way, as CUSOP is looking at a number of proposals for a credit union debit card solution.

Once in place, credit unions say that they will be able to offer personal banking services “at a fraction of the cost of the banks”.

1. First, you need to decide which bank you want to switch to. Maybe you’ll already have made your mind up after reading this article. Once you know the bank you can ask them for a switching pack, which will tell you how the process works and help you move direct debits etc.

2. Pick a switching date on which your new account will start to work. You’re typically advised to pick a date on which there isn’t much activity on your account, in case anything goes wrong.

3. Complete account transfer forms with details of direct debits etc, and permission to switch the balance on your old current account over to your new one. You don’t have to close your existing current account, but if you’re still running cards etc on the account, you’ll be hit with stamp duty and bank charges, which may defeat the purpose of switching in the first place.

4. Start using your new bank account. This should be possible within about 10 working days, once your application has been approved.