Stocktake: ‘World seems to be more than 15% screwed up’ 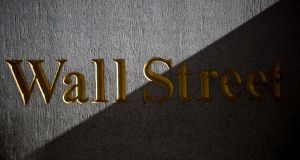 The bounce in indices outside the US has been weaker, and investors are entitled to wonder if American optimism is overdone. Photograph: Michael Nagle/Bloomberg

“We’re only down 15 per cent from the all-time high of February 19th,” cautioned Oaktree Capital founder Howard Marks last week. “It seems to me the world is more than 15 per cent screwed-up”.

Marks’s pithy observation encapsulates the reservations of those who see the market rebound as one that has gone too far, too fast.

Bulls can credibly argue a strong rebound was due, given the extent of the March sell-off and the fact that policymakers and central banks have demonstrated a “whatever it takes” attitude. Still, the bounce in indices outside the US has been weaker, and investors are entitled to wonder if American optimism is a little overdone.

Analyst estimates suggest US stocks now trade on their highest forward valuation multiple in 18 years, notes Bloomberg’s John Authers. Additionally, many analysts have been slow to update their earnings estimates, so the true picture may be worse again.

Valuation aside, uncertainty – regarding the economy reopening, the response of consumers, the health outlook as restrictions are lifted – remains at abnormally high levels. It took seven years for markets to regain their 2000 highs in 2007 and 5½ years to get back to their 2007 highs in 2012, says Marks. “Is it really appropriate that, given all the bad news in the world today, we should get back to the highs in only three months? That seems inappropriately positive”.

1 Moving in and out of lockdown is a recipe for economic disaster
2 Viacom and CBS mogul Sumner Redstone dies aged 97
3 Shed Distillery in Leitrim to open €3m visitor centre next month
4 Buying a second home now that we work from home
5 Revised help-to-buy scheme opens for applications
6 Objectors stall production of enough timber for 5,000 houses
7 UK tips into deepest recession on record after 20% contraction
8 AIB concedes Covid mortgage policy was ‘regrettable’
9 Divorce: What will it cost and can you afford it?
10 MSD buys Takeda biologics plant in Dunboyne
Real news has value SUBSCRIBE
Save money on international transfers