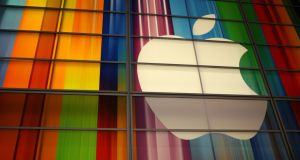 Amazon and Apple are up over 70 and 50 per cent respectively in 2020, but many stocks are still struggling. Photograph: Kimihiro Hoshino/AFP via Getty Images

Tech stocks did something unusual last week – they fell. An index tracking the S&P 500’s technology sector fell three days in a row, the first such occurrence in 107 trading days. That’s the longest streak in history, according to LPL Research.

Mega-cap tech stocks have driven indices higher – Amazon and Apple are up over 70 and 50 per cent respectively in 2020, while Microsoft and Facebook have gained over 30 per cent – but many stocks are still struggling.

Although indices briefly hit all-time highs last week, half the stocks in the S&P 1500 remain at least 20 per cent below their own highs, notes Baird Investment’s Willie Delwiche. SentimenTrader’s Jason Goepfert points out that an equal-weighted version of the S&P 500, which gives the same weight to all stocks in the index as opposed to weighting them by market capitalisation, is still over 7 per cent below February’s highs.

This is a bull market, but it’s a very narrow one that remains dependent on a handful of tech giants.