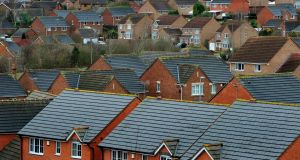 You should not be paying local property tax on those spaces that are already subject to commercial rates. Photograph: Rui Vieira/PA Wire

My wife started her own business in 1999. As she works from home, in 1999 we built an extension to our home in order for her to carry out her business. She contacted South Dublin County Council at the time and they came out and put a rateable valuation on the rooms that she uses.

Ever since she has paid rates to South Dublin County Council. Currently she pays €600 per year.

You and your wife have clearly made every effort to play fair by the system, having proactively contacted the council to register for commercial rates back in the late 1990s. Now you appear to be paying on the double: €600 in commercial rates on the rooms used to run your wife’s business and local property tax on the entire extended property.

As far as I can see, you should not be paying local property tax on those spaces that are already subject to commercial rates.

In explaining this, Revenue states: “This exemption applies where a property is solely used as a dwelling and commercial rates are payable on the property to a local authority. For example, guesthouses that are registered as such with Fáilte Ireland would be eligible for this exemption because they are fully subject to commercial rates.”

That might lead you to think that if the full property is not subject to commercial rates you would not be able to claim the exemption. However, in a related page on “Frequently Asked Questions” about exemptions to the tax, available at http://iti.ms/1KG8Ojs, the tax authority addresses the issue of properties that are used partly for commercial purposes and also as a residence.

It says: “In the case of a property that is used for both commercial and residential purposes, LPT [local property tax] is only due on the residential portion of the property (which would not be subject to commercial rates).”

It is true that the Revenue refers to the example of an apartment over a shop but it is clear from its response that the same principle applies to situations such as yours.

You say you have paid local property tax on the full property to date. It strikes me that you should be claiming a refund for tax overpaid.

Of course, as this is a self-assessed tax, I’m not sure what provision has been made for refunds. However, as Revenue reserves the right to pursue you for higher local property tax if it feels you have undervalued the property, I see no reason why they should not be open to a claim for a refund because you effectively “overvalued” the property tax inadvertently because of a confusion over exemptions.

Going forward, it appears you need to value the part of the property used as a residence, rather than the full property, for the purposes of LPT. As the initial valuation is supposed to be fixed until next year, you will need to contact Revenue to have that adjusted formally.

Fairness and those Standard Life tax bills I have never got satisfaction or payment from Standard Life. Has there been any resolution of the issue? Was it An Post, Royal Mail or Standard Life? Has anyone admitted responsibility?

I think the total loss to Irish shareholders is in the orders of many millions (ie 4,000 shareholders times say €2,000 on average is a substantial sum). Ultimately, Revenue will definitely benefit and Irish shareholders will lose. Mistakes happen and I think all anyone wants is fairness. Any ideas how [to proceed] on this without going down a legal route in some form of “class” type action? Surely Revenue should not be unjustly enriched and ordinary people and pensions very unfairly impoverished?

I don’t want to go back into the entire Standard Life saga but, to answer your queries succinctly, there has been no resolution. It is clear that the problem lay with the postal services – but which one? We’re told that cannot be determined.

The figures are potentially large although it should be noted that many Irish shareholders did not respond to the offer at all and so can have little complaint.

You talk about fairness but, in truth, when things go legal, fairness is not necessarily the issue any more. This is essentially a matter of regulation and contract law. Having said that, the experience of similar issues in the past is that you are unlikely to get any pleasure through either the ombudsman route (here or in the UK) or via a class action in the courts.

Ultimately, the only way this is likely to be sorted out is if Minister for Finance Michael Noonan makes specific provision in the forthcoming budget on October 13th, even though he has previously expressed scepticism about the need to intervene. The best thing you and others in the same position can do is to contact his office and those of their local Government TDs. Send your queries to Dominic Coyle, Q&A, The Irish Times, 24-28 Tara St, D2, or email dcoyle@irishtimes.com. This column is a reader service and is not intended to replace professional advice.