Picking and sticking with superstar investors 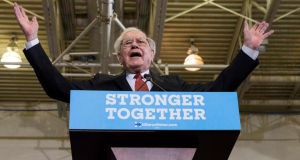 Warren Buffett (speaking for the Hillary Clinton campaign): like other legendary fund managers, he has had his bad years along with the good. Photograph: Ruth Fremson/The New York Times

Many investors are sceptical of the oft-repeated advice that it is extremely difficult to beat the stock market, arguing that legendary money managers such as Warren Buffett, Peter Lynch and Anthony Bolton have proved otherwise.

However, investing with superstar fund managers is one thing; securing their returns is another matter entirely.

Piggybacking on the returns of great investors is more difficult than it seems, as exemplified by the case of former Fidelity Magellan fund manager Peter Lynch.

Regarded as one of the best-ever fund managers, Lynch’s Magellan fund averaged annualised returns of 29.2 per cent over the 1977-1990 period, almost double the S&P 500’s annual returns over the same period. The magic of compound interest means those figures actually understate the difference in returns: a €1,000 investment in Lynch’s fund in 1977 would have been worth almost €28,000 after 13 years, compared to about €6,700 for a fund tracking the S&P 500.

Lynch was consistent in his outperformance, returning more than the S&P 500 in 11 of the 13 years he spent running the Magellan fund. More than a quarter of a century on, his reputation endures, as evidenced by the continued popularity of his books, One Up on Wall Street and Beating the Street.

Investors in the Magellan fund did not do nearly as well, however. In his new book Heads I Win, Tails I Win, Wall Street Journal columnist Spencer Jakab writes that Lynch himself calculated that the average investor in his fund made only around 7 per cent annually over that period.

Other accounts regarding the behaviour of Fidelity investors during Lynch’s tenure suggests that the so-called behaviour gap – the difference between investor returns and fund returns – was not quite that extreme, although it’s commonly estimated that the average Magellan fund investor ended up underperforming the S&P 500 during the 1980s.

Lousy timing was the problem. Money would flood into the fund after very strong periods only for investors to withdraw en masse following tricky spells.

Late to the party

The Four Pillars of Investing

That’s extremely impressive, but the outperformance is not nearly as remarkable as implied by the 1977-1990 figures.

Of course, few investors would have been aware of Lynch in 1981. As his reputation grew, assets under management swelled, from under $100 million in 1981 to more than $16 billion in 1990. This forced Lynch to buy increasingly large companies rather than the little-known small- and mid-sized companies that characterised his portfolio in the early years.

Furthermore, he had to buy lots of stocks; by 1990, the Magellen fund owned more than 1,700 companies. Inevitably, this limited Lynch’s ability to outperform. During his last four years at the helm, he was only able to outperform the S&P 500 by 2 per cent annually, notes Bernstein, who concludes: “It is not commonly realised that the investing public had access to Peter Lynch for exactly nine years, the last four of which were spent exerting a superhuman effort against transactional expense to maintain a razor-thin margin of victory.”

Often dubbed Britain’s answer to Warren Buffett, a £1,000 investment in Bolton’s Fidelity Special Situations fund in 1979 would have been worth £147,000 when Bolton retired in 2008. Like Lynch, however, no one knew anything about Bolton in 1979.

In his book Smart Investing, investment consultant Tim Hale gives the example of an ordinary investor who reads about Bolton’s stellar returns in 1989 and decides it’s time to get on board. Within three years, however, Bolton’s fund is a “whopping 45 per cent or so behind the market”. The investor is fretting: is Bolton brilliant or has his luck ran out? He decides to hold on and is almost back in line with the market by 1996. However, severe underperformance ensues again in 1997 and 1998. Not until 2000, Hale notes, did Bolton get back ahead of the market. “Eleven years of uncertainty. Would you have had the stomach to see this through?” asks Hale. “I doubt it and I can understand why.”

Even the very best investors suffer lengthy periods of underperformance. US fund manager Bill Miller managed to avoid this fate for a long time. He famously outperformed the S&P 500 every single year between 1991 and 2005.

Most of the time, Miller was rewarded for his aggressive approach whereby he doubled down on losing positions. In 2008, however, his luck ran out: having stocked up on collapsing financial stocks, Miller’s Legg Mason Capital Value Trust fund fell 55 per cent. His Opportunity Trust did even worse, falling 65 per cent.

Miller has posted strong returns in recent years but his investors must be willing to endure a rollercoaster ride. He admitted earlier this year that his fund had lost 20 per cent in January alone. It remains debatable whether he is a skilled contrarian investor or simply a risk-taker who outperforms in good times and underperforms in bad times.

The credentials of another celebrated investor, Franklin Templeton’s Michael Hasenstab, are also being questioned at the moment.

Hasenstab, who made billions for his investors by buying Irish bonds during Ireland’s financial panic, was named Global Bond Manager of the Year by Investment Week in 2008, 2010, and 2011.

Does this mean Hasenstab’s earlier success was a product of luck? Or is he a skilled investor who is merely suffering an inevitable downturn, much like Anthony Bolton did between 1989 and 2000? The same question arises in the case of high-profile hedge fund manager Bill Ackman, who has been the subject of much derision following devastating losses over the last 18 months but who has nevertheless delivered outsized long-term returns.

It’s very difficult to tell in such cases. A recent Morningstar study, Performance Persistence Among US Mutual Funds, found there is “no meaningful relationship between past and future fund performance”. Most of the time, “the odds of picking a future long-term winner from the best-performing quintile in each category aren’t materially different than selecting from the bottom quintile”, so long-term investors “should not select funds based on past performance alone”.

In other words, investors such as Hasenstab, Ackman and Miller should not be written off for underperforming, but nor should they be necessarily be lauded for having outperformed over longer periods.

However, investors who bailed out on Bill Miller in 2007 following a second successive year of underperformance would have been spared the almighty bloodletting that followed in 2008.

Similarly, there is no real way of knowing if the Hasenstabs and the Ackmans of today’s investing world will bounce back or whether their earlier success will end up being forgotten.

Every thoughtful investor should know that picking a superstar fund manager in advance is a very difficult proposition; sticking with them may prove just as tricky.

1 Berkshire Hathaway profits surge despite $10bn writedown
2 Financial ombudsman warns consumers of attempted scam
3 Facebook content moderator lodges High Court action
4 ‘Saudi Arabia is where the opportunities will happen in future’
5 DCU in AirSpeed Telecom WiMax trial
6 Scars from the crash give Irish banks 2.6 billion reasons for Covid caution
7 Why the Covid-19 crisis may push up house prices
8 MSD buys Takeda biologics plant in Dunboyne
9 Chris Johns: Digital equality must be moved up the priority list
10 So you want to invest in the stock market: what will it cost?
Real news has value SUBSCRIBE
Save money on international transfers