Many investors are influenced by the psychology of stock price levels 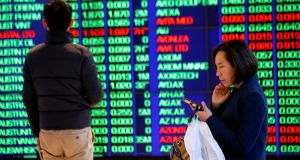 Researchers have found high-profile indices tend to be restrained by psychologically important levels such as multiples of 100 or 1,000. Photograph: Steven Saphore/Reuters

Are you a Spock-like investor wholly focused on value and fundamentals or does the numerology of trading affect your behaviour? To find out, consider whether you agree or disagree with the following statements:

One might think the rational response is to laugh off such considerations. After all, a stock price alone says nothing about a company’s market valuation: TripAdvisor’s stock price (about $70) is higher than Microsoft’s (about $55), but the latter’s market capitalisation ($440 billion) is more than 40 times larger than TripAdvisor’s ($10 billion).

However, many investors are influenced by the psychology of stock price levels, according to the authors of Nominal Price Illusion, a recent paper published in the Journal of Financial Economics. The researchers’ analysis found that call options, which give investors the right to buy shares at an agreed price before an agreed date, tend to be more overpriced for low-priced stocks than high-priced stocks. The lower the stock price goes, the more overpriced the call options become.

Various other studies have also noted ordinary investors’ preference for low-priced stocks. Studies show ordinary investors hold lower-priced stocks than institutions; there is an increase in the number of small shareholders when companies split their stock to lower price levels; the offer price of stocks at initial public offerings (IPOs) strongly influences whether it is more likely to be held by institutions or retail investors. There is even evidence investors categorise stocks based on price, with stocks that undergo splits experiencing an increase in comovement (moving in tandem) with lower-priced stocks and a decrease in their comovement with higher-priced stocks.

As one study put it, investors “may perceive low-priced stocks as being closer to zero and farther from infinity, thus having more upside potential”. Unfortunately, that’s not a wise assumption – you can always lose your entire investment, no matter how low a stock price may be.

This illusion about unlimited upside potential may be fuelled by a misreading of market history. Apple shares, for example, have soared more than 100-fold since late 2002; priced at over $100 today. Long-term Apple stock price charts indicate the company was a penny stock in late 2002, trading at just $0.88.

A novice investor might look at this chart and deduce the best chance of finding a growth company with exponential potential is to hunt for very low-priced stocks. However, Apple split its stock in 1987, 2000, 2005 and 2014. Had it not done so, it would be trading at more than $5,600 today.

Even at its lowest ebb, it was never close to being a penny stock. The same is true of countless other long-term success stories such as Microsoft.

Long-term charts indicate shares cost less than six cents when it debuted on the Nasdaq in 1986, but that’s an illusion created by the fact the company split its stock on nine occasions – shares actually traded for $28 in 1986.

Novice investors are not the only ones to anchor to seemingly irrelevant price points – everyday market prices are influenced by trading psychology relating to round numbers. One paper, Round Numbers and Security Returns, found returns are “significantly higher” when a stock’s closing price is just above a round number. Returns are notably lower following “9-ending prices” compared to “1-ending” prices – that is, a stock with a closing price of $25.51 tends to perform better than a stock that ends the trading day at $25.49.

Analysts are also influenced by round numbers. One paper, Rounding of Analyst Forecasts, found analysts’ earnings per share (EPS) forecasts are much more likely to end in round numbers than actual EPS. Analysts who round EPS forecasts tend to be “less informed, exert less effort and have fewer resources”.

Academics have long documented similar effects in the trading of indices. One 1993 paper, for example, found the Dow Jones Industrial Average tended to be restrained by psychologically important levels such as multiples of 100 or 1,000; once the index eventually broke past such levels, it moved more than was otherwise warranted.

In little-watched indices such as the Wilshire 5000, no such effect was evident.

Similar conclusions were reached in a 2015 paper, Market-Wide Attention, Trading and Stock Returns: ordinary investors are more likely to become more active in their investing following attention-grabbing events such as the Dow Jones hitting a new record.

Unlike the 1993 paper, the researchers found investors tend to react by “aggressively” selling their stock holdings, dampening market prices. Again, this effect was evident only in the most visible indices, the Dow and the Nasdaq, indicating that “attention rather than economic information” was driving the behaviour.

Gold prices are no different, according to Psychological Barriers in Gold Prices?, a 2005 paper co-authored by Prof Brian Lucey from Trinity College Dublin. It found “strong support for the presence of psychological barriers in gold prices”, with price levels such as $200 and $300 influencing investor behaviour.

Market numerology can drive irrational investor behaviour, although the effects can sometimes be counterintuitive. For example, investors often assume stocks trading near 52-week highs are at risk of being overvalued, while stocks trading far away from 52-week highs may be cheap. However, an influential 2004 paper, The 52-Week High and Momentum Investing, found the opposite was true. The former were much more likely to be undervalued and the latter overvalued.

Crucially, this phenomenon should not be confused with the well-known momentum effect, whereby high-flying stocks tend to keep gaining before eventually reversing. A stock being near 52-week highs tends to be predicative whether or not it has displayed strong momentum; additionally, no long-term reversal occurs. The same process tends to be evident in stocks near 52-week lows – investors underreact to bad news, keeping prices temporarily afloat. However, the information eventually prevails and lower prices ensue.

As exploitable market anomalies go, this is a “remarkable” one, the authors noted, “because the nearness of a stock’s price to its 52-week high is among the information that is most readily available to investors. One need not even compute a past return.”

These findings were confirmed in a 2105 paper, Psychological Barriers, Expectational Errors and Underreaction to News. It found that analysts – always an optimistic bunch – expect stocks furthest from a 52-week high to appreciate by almost 50 per cent, more than three times higher than the 15.7 per cent appreciation expected of stocks trading near 52-week highs. These skewed expectations result in stocks nearest their 52-week highs subsequently seeing “systematically positive earnings surprises”; those farthest from 52-week highs experience “systematically negative earnings surprises”.

In other words, new information is not appropriately “impounded into prices” of stocks nearest their 52-week highs, but not because they are overvalued. Rather, investors initially underreact to good news and are “hesitant to push the stock above this psychological price barrier”.

Returning to the three questions asked at the beginning of this piece, informed investors would be wise to generally pay little heed to the psychology of stock price levels. Stocks trading near 52-week highs are an exception, however. This is one price point that may well be predictive of future returns – just not in the way most investors expect.

1 Columbia Sportswear defies gloom with first Irish standalone shop
2 Nine more suing INM and Leslie Buckley over alleged data hacking
3 ‘The rental situation stops me moving back home’
4 Restaurants file court actions against insurers over lockdown losses
5 How to further divide the economy using the wage subsidy
6 Brexit: System agreed for Irish goods to skip checks on UK trade
7 Second Covid-19 outbreak and no-deal Brexit an appalling vista
8 Could your old car be giving away all your secrets to its new owner?
9 A perfect workspace between home and office
10 Stocktake: Playing poker with the day traders
Real news has value SUBSCRIBE
Save money on international transfers