Stocktake: Are we any closer to a market bottom? 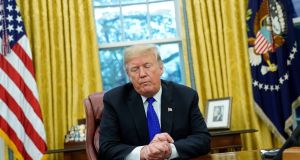 US president Donald Trump: he has threatened to shut down the government if his funding demands for the US-Mexico wall are not met. Photograph: Reuters/Jonathan Ernst

US stock markets have been shaky lately. In fact, they’ve been shaky since peaking 11 weeks ago. Are we any closer to a bottom?

Bears might see such a question as impatient and premature given non-US markets have been declining since January.

Still, bulls who see recent weakness as a correction in an ongoing bull market as opposed to the beginnings of a drawn-out bear market, are encouraged by various developments. Firstly, stocks tend to retest previous price lows during corrections. October’s price low was retested in November and again this month, which LPL Research sees as “an important part of the bottoming process”.

The rise in market fear, as evidenced by increased volatility and trading volumes, elevated hedging activity, and extremely negative market breadth also suggests “progress has been made toward putting in a bottom”.

Although we might well be closer to a bottom, bears might retort that recent price action is hardly indicative of a healthy market in some key respects, the main one being rallies have fizzled out all too quickly.

Bulls hoped a strong earnings season would ease investor nerves in October but it didn’t. They argued stocks would rally after the US midterm elections were out of the way in November, yet they didn’t.

They said stocks would rebound if Federal Reserve chief Jerome Powell reined in his hawkish language. He did, but stocks didn’t. They said seasonal strength in November-December would support stocks, but it hasn’t. They blamed stock declines on the spike higher in US bond yields, but the recent contraction in yields hasn’t supported indices.

No matter the news, stocks have just not been able to hold on to gains for any period of time. The S&P 500 recently experienced five straight days where it traded down 1 per cent or more from its opening price, Bespoke Investment noted last week.

In fact, the buy-the-dip trade hasn’t been working for some time now. Morgan Stanley figures show stocks have fallen slightly this year on the day following weekly market declines – the first time since 2002 that this buy-the-dip trade hasn’t worked. This failure to rebound is something only ever seen in bear markets, the bank warns. The mindset of traders has changed – instead of buying the dip they’re selling the rallies.

Stocks briefly tumbled last week after Donald Trump said he would be “proud” to shut down the US government if his funding demands for a wall on the US-Mexico border were not granted. Markets have no shortage of worries right now – should the possibility of a government shutdown be added to the list? Probably not.

Markets quickly recovered their losses, recognising this was likely a case of Trump being Trump, of engaging in anti-immigration theatrics to please his base. However, even if there is a government shutdown markets are unlikely to take fright. “The politics of a government shutdown are pretty low stakes”, tweeted predictions expert Nate Silver. “Unless it lasts long enough to actually disrupt the economy nobody is going to care about it two years from now.”

That is echoed by LPL Research, which notes there have been 20 government shutdowns since 1976. Half the time, stocks rose, half the time they fell, with the median move being exactly 0 per cent. Stocks gained during each of the last five shutdowns, it added.

In short, markets have many problems to be worrying about at the moment, but a US government shutdown isn’t one of them.

Will oversold stock markets get to enjoy a Santa Claus rally? The Santa Claus rally refers to a specific period – the last five trading days of the year and the first two of the new year – during which stocks often enjoy unusually strong returns. First popularised by the annual Stock Trader’s Almanac in 1972, sceptics often assume the Santa Claus rally is no more real than Santa himself (I’m guessing children don’t read Stocktake, hopefully it’s safe to say that). In fact, studies confirm stocks typically do enjoy a “short, sweet, respectable rally” over Christmas, as the almanac puts it.

Of course, it’s also true that December has traditionally been indices’ strongest month, but stocks haven’t stuck to the historical script lately, falling hard in the first half of the month. If stocks continue to buck the historical trend over Christmas, then further pain may lie ahead, according to the almanac. The Santa Claus rally is a well-established phenomenon so its non-appearance can be an indicator of pronounced market anxieties – hence the expression: “If Santa Claus should fail to call, bears may come to Broad and Wall”.