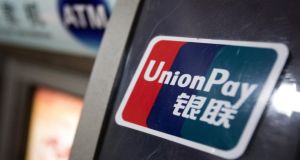 UnionPay: its days of domination may be under threat after a complaint in 2012 by the United States to the World Trade Organisation

The Chinese payment system UnionPay, operated by the People’s Bank of China and owned by the about 85 domestic banks, which dominates the credit card system in China, has some illuminating advice on its website for Chinese travellers to Ireland.

“The Irish are kind and simple, ready to help others. They like outdoor activities, including climbing, golf, navigation, walking and travelling. It is a common way of entertainment that they gather and talk in a bar or at home,” it says.

The article describes how the capital, Dublin, has beautiful beaches, and “is a renowned tourist city in Europe”. “The official languages are Irish and English. Ninety-four per cent of its residents are Catholics, the rest being Christians and Protestants,” it says. “Most country areas of Ireland still maintain their natural sceneries undestroyed so they have become ideal habitats for thrifty vegetations and all kinds of animals and birds.”

Chinese banks issue Visa, MasterCard and American Express credit cards, and their payments are processed through their foreign currency networks, but they are not widely accepted. Instead, Chinese cardholders use them mainly for foreign travel.

Despite this useful service for Chinese travellers, UnionPay’s days of domination may be under threat after a complaint in 2012 by the United States to the World Trade Organisation that China unfairly discriminates against foreign payment processors.

Global operators such as Visa and MasterCard are now able to apply for licences to clear domestic Chinese payments.

The announcement that the system might be about to change led to big share price gains for Visa and MasterCard. There are almost as many UnionPay cards globally in circulation as the two leading payment cards combined, and UnionPay is projected to grow 51 per cent by 2017.

The state council, or cabinet, said last October it would allow foreign firms to access the market – rules have been in effect since June 1st. Previously all renminbi payments had to be cleared through China UnionPay, a network created by the central bank.

As part of a crackdown on corruption, the Macau authorities last year restricted the use of UnionPay cards in its casinos, where mainland punters would use their cards to buy expensive items.

Uphill battle It’s still going to be an uphill battle for the foreign card operators. UnionPay is used by 80 per cent of debit cards and accounts for 72 per cent of total transaction value in 2014, according to Datamonitor.

Having UnionPay is a big bonus in wooing Chinese tourists. A survey by Tourism Ireland of 1,000 Chinese adults showed that acceptance of Chinese bank cards was named by 81 per cent as a key factor in destination choice.

A number of retail outlets in Ireland, such as Brown Thomas and Kildare Village, accept UnionPay, and last year AIB Merchant Services became the first Irish merchant acquirer to add UnionPay to its list of available card schemes, signing a deal with UnionPay International to provide Irish businesses with the ability to accept transactions made using UnionPay debit and credit cards.