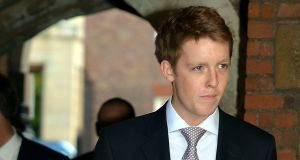 Hugh Grosvenor at the Chapel Royal in St James’s Palace, ahead of the christening of the three month-old Prince George of Cambridge by the Archbishop of Canterbury in 2013. Photograph: Getty Images

It’s Friday night and you’ve just inherited more than €10.5 billion. Questions of “what next” take on a whole new, rather absurd light.

Such is today’s reality for Hugh Grosvenor, the 25-year-old son of a landed UK billionaire who once remarked his child was born with the longest silver spoon anyone could have.

“He can’t go through life sucking on it,” the late duke Gerald Cavendish Grosvenor (64) added, although it now appears that is exactly what he is set to do.

However, the new Duke of Westminster’s overnight transformation into a multibillionaire has not come without criticism and his illustrious story is tainted by widespread calls for an overhaul of the UK tax system that has allowed him to keep the entirety of his inheritance.

It is thanks to a series of such trusts, dating as far back as 1953, that Hugh and his three sisters will avoid the 40 per cent levy families normally face on the death of parents.

“For people who are really wealthy, inheritance tax has become an optional choice,” John Christensen, director of the Tax Justice Network told the Guardian in the aftermath the duke’s £9 billion inheritance this week.

“If you are lucky to be born into a very wealthy family you will be untaxed. For most normal people this is extraordinary and unacceptable.”

Richard Murphy, the accountant and political economist whose ideas have been adopted by the Labour leader Jeremy Corbyn, told the newspaper the mind-boggling inheritance highlighted a need for systemic reform.

“We should require that these trusts publish their annual accounts just like a private company,” he said.

“And we need a register of trusts. The need for privacy around some trusts is understandable. But where there is public interest, where they are trading, where there are substantial assets over a certain value, the accounts should be published.”

Born in 1991, Hugh Grosvenor was destined to take charge of the family’s storied fortune.

His father had tried to give his four children a normal childhood – sidestepping aristocratic boarding schools for the state primary school near Eaton Hall, the family residence close to Chester.

Later they went to a private day school and Hugh attended the University of Newcastle.

The 25-year-old, who becomes the seventh Duke of Westminster, works at Bio-bean, a start-up that turns coffee grounds into fuel. Before that he had stints at Grosvenor, the family business, in San Francisco, London and Hong Kong, including at its Wheatsheaf venture capital business, according to his LinkedIn profile.

Reminders of his privileged background were never far away. He became one of Prince George’s godparents in 2013. A year earlier his 21st birthday party had drawn press scrutiny, featuring comedian Michael McIntyre and rap duo Rizzle Kicks, at a reported cost of £5 million (€5.8 million).

His father, who took over the dukedom aged 27 in 1979, said it had taken him “10 years just to understand what I had inherited”.

“[Hugh] has to see himself as a caretaker, keeping the estates in good shape in his lifetime.”

The Grosvenor fortune began in the 17th century with 500 acres of swamp, pasture and orchards to the west of London. Today one of Britain’s remaining great landed estates makes up part of London’s most exclusive areas.

“For a family that did not need to set themselves up as a professional business, they did an amazing job of creating a very powerful brand – and the legacy of much of that would be down to the late duke,” said Toby Courtauld, chief executive of the listed property company Great Portland Estates.

“That will be an enduring legacy. He has created an exceptionally high quality real estate business,” he added.

The late duke had remarked on the family’s strong survival instinct.

“We have been pursued by every single government and, prior to that, Cromwell had a damn good go at us. The great thing is that we have kept our heads on our shoulders,” he said.

It is a heavy legacy that now rests on the shoulders of a man in his mid-20s, beginning his first weekend as a multibillionaire.

1 In this strangest of recessions, what happens next for Ireland?
2 Michael O’Leary is the boss you want to lead an airline out of crisis
3 Estée Lauder staff at Dublin airport plan further strike action
4 Air travel never going ‘back to way it was’
5 Ireland’s Covid-19 economy in five graphs
6 High Court told FBD staff texts discussed policies in ‘disparaging terms’
7 London insurance group acquires stake in Dublin company
8 EY Entrepreneur of the Year: nominee profiles
9 Should I switch bank now with Ulster Bank at risk of closing?
10 Irish company to test vaccines on volunteers deliberately infected with Covid-19
Real news has value SUBSCRIBE
Save money on international transfers