Dotcom bubble: lessons to learn from the greatest market mania of recent times

The bubble burst in March 2000, proving that sometimes investors go bananas and rationality goes out the window 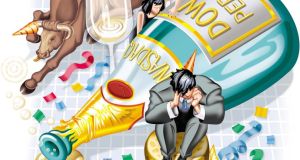 Party’s over: The Nasdaq lost 78 per cent of its value in the years following 2000. Illustration: Steve Lopez/Bay Area News Group/MCT via Getty Images

Fifteen years ago today, the dotcom bubble burst, ending the greatest market mania of recent times. What followed was market carnage on a grand scale. The Nasdaq lost 78 per cent of its value over the coming years. By 2004, more than half of the internet companies created since 1995 had disappeared. Technology investors everywhere suffered a lengthy hangover; even today, the Nasdaq remains just below its March 2000 peak.

Those who cannot remember the past, as the old cliché has it, are condemned to repeat it. Here are six lessons to be taken from the dotcom bubble.

Some examples? Well, companies that simply added .com to their name averaged a 74 per cent gain within 10 days. In 1999, 118 stocks more than doubled on their first day of trading.

One company, TheGlobe.com, rose by 606 per cent on its market debut in November 1998 – the largest first-day gain in market history. (The firm’s stock price later declined by more than 99 per cent).

The internet sector rose by more than 1,000 per cent between 1998 and 2000, with price-earnings ratios hitting levels never seen before. According to one study, the sector traded on 856 times earnings in 1999.

The combination of incompetence and exuberance is exemplified in a story told by Broadcast.com founder Mark Cuban. Prior to the company’s 1998 initial public offering (IPO), Cuban met hundreds of fund managers.

“The vast majority of people in the meetings had no clue who we were or what we did,” said Cuban. Their lack of knowledge “got to be such a joke” that Cuban and his partner “used to purposely mess up to see if anyone noticed”.

Despite being “completely clueless”, every single investor who met Cuban placed the maximum order allowable for the stock, and Broadcast.com rose 250 per cent on its first day of trading before being sold to Yahoo in 1999 for $5.7 billion.

Nor did high valuations put off fund managers such as Alexander Cheung: he predicted his Momentum Internet Fund, which had already more than doubled in the first five months of 1999, would average annual gains of 35 per cent over the next 20 years.

As for chief financial officers, a Duke University survey found that 82 per cent believed their stock was underpriced at the market peak in March 2000; only 3 per cent thought their stock was overpriced.

In the late 1990s, the future seemingly belonged to AOL, Yahoo and Excite. Google was a minnow, Excite reportedly turning down the chance to buy the firm for less than $1 million in 1999. Facebook and Twitter had not yet been born. Apple was an also-ran, valued at less than $5 billion compared to $750 billion today, while Microsoft’s dominance seemed impenetrable.

In 15 years’ time, what will the technological landscape look like? Who will be the big market winners? No one knows.

He was partly right, in that the internet did change the world. While huge growth and transformation may have been a given, decent returns were anything but. Growth means nothing if it has already been priced in. The Nasdaq 100 rose almost seven-fold between 1995 and 2000, all but ensuring that technology stocks would be playing catch-up over the next 15 years.

When it comes to investing, expectations are everything. Betting on stocks for which the market has low expectations tends to be more rewarding than betting on high-flying growth stocks for this very reason.

That’s why if you are going to invest in technology stocks, you may be better off looking at the less fashionable names. According to portfolio manager and blogger Patrick O’Shaughnessy, the cheapest quintile of technology stocks have historically generated average annual returns of 14.5 per cent, compared to just 3.5 per cent for the most expensive names.

It’s easier to go with the crowd

Well, some high-profile names did so, only to pay a heavy price. “We were told we were complete idiots and several clients banned us from their buildings,”, said James Montier of GMO, the fund headed by value-investing icon Jeremy Grantham.

Clients left in droves, with GMO’s assets declining by almost 45 per cent in the late 1990s. As Grantham later noted, missing a big move – even an utterly unjustifiable one – “is to take a very high risk of being fired”.

Another renowned value investor, Jean-Marie Eveillard, suffered the same fate. “After one bad year investors were upset,” he said. “After two they were mad, and after three they were gone.” By early 2000, Eveillard’s investors had withdrawn two-thirds of their assets.

Similarly, client withdrawals and poor performance led to hedge fund titan Julian Robertson closing his famous Tiger funds, which had grown 85-fold over the previous three decades, just prior to the market peak.

“There is no point in subjecting our investors to risk in a market which I frankly do not understand,” said Robertson.

Journalists, too, were pilloried for expressing scepticism. In 1999, finance commentator Jason Zweig upset MoneyWeek readers by warning most internet firms would likely end up losing 90 per cent of their value.

“Every day for months,” Zweig later said, “I received dozens of emails calling me a moron, a dinosaur, and a seemingly endless variety of anatomical obscenities.”

The “prime directive” for fund managers, as Grantham concluded, is “first and last to keep your job”. Fighting the trend may be noble but it’s easier to “go with the flow” – even if that means buying into a market they know to be crazy.