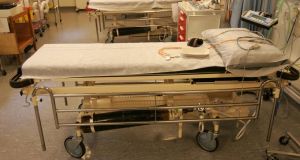 Patients are almost certainly dying unnecessarily while waiting on trolleys for a hospital bed, the president of the Irish Hospital Consultants Association has said.

Patients are almost certainly dying unnecessarily while waiting on trolleys for a hospital bed, the president of the Irish Hospital Consultants Association has said.

Speaking at the organisation’s annual conference in Cork, Dr Gerard Crotty said that international studies had shown that waiting on trolleys after doctors had taken a decision to admit a patient had been shown to be associated with a 30 per cent increase in mortality.

“Thus, there are most certainly unnecessary deaths are occurring”, he said.

He said it was very worrying that there were increases in the number of patients waiting in emergency departments in what was one of the best summers in years.

“I fear for what will happen as we enter the winter.”

Dr Crotty said that Ireland’s health system was in crisis due to the damage caused by years of excessive cuts.

He said that the easy cost-saving measures had been exhausted and the system was now showing the strain. He said the number of day case patients treated was now falling as an inadequate stock of beds tried to deal with he increased number of emergency patients.

Dr Crotty said that the “crude frontline budget cuts and an inappropriate management focus on unrealistic budget limits to the exclusion of appropriate consideration of clinical need and patient safety is having disastrous effects on patients.”

“”How can the health service ever succeed if it is set up to fail due to insufficient funding? Patients deserve a better health service than we currently have. It requires a realistic budget to deliver safe, high quality care to patients without unacceptable delays. Frontline services need to be given more resources to manage their way out of what will otherwise be a patient safety crisis.”

“The Government must provide significantly increased funding for acute frontline services in Budget 2015 to offset years of underfunding. However, it is not enough to solely provide a ‘token’ budget increase. The Government must recognise that the health service cannot take any more of the short term, hand-to-mouth approach that has dominated over the last few years. It must allow our damaged health service to recover so it can deliver safe high quality care to a growing number of patients without unacceptable delays,” said Dr Crotty.

He said the health service was now facing a chronic consultant recruitment and retention crisis that was directly affecting patient care.

Dr Crotty said he welcomed the acknowledgement by the Government that the decision to introduce a 30 per cent pay cut for new entrant consultants in 2012 had been a mistake. However he said that this should be fully reversed.