Developer ‘has no intention of selling his shareholding in Maybourne’ 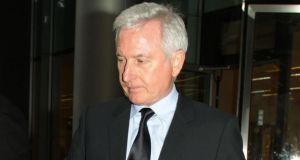 Belfast developer Paddy McKillen: an Abu Dhabi fund has indicated it would be willing to settle for a majority stake in the Maybourne hotel group, with Mr McKillen holding a minority interest – an acceptance the Irishman is not prepared to leave the scene. Photograph: Yui Mok/PA Wire

The offer for Claridge’s, the Berkeley and the Connaught hotel is but the latest bid by Middle Eastern states to buy prime properties in London over the past year, though it puts a higher valuation on the hotels than any former offers.

Mr McKillen owns 36 per cent of Coroin; the Barclay brothers, Frederick and David, own 28.36 per cent, though they control the remaining shares owned by Derek Quinlan because he mortgaged the shares to them.

However, Mr McKillen last week launched legal proceedings in Dublin to ensure that he is offered first refusal of any shares put up for sale by others.

A spokesman for Mr McKillen told the Sunday Times: “He has no intention of selling his shareholding in Maybourne. He is, however, willing to engage with any potential new partner.”

Mr McKillen’s shares are mortgaged to the private US equity firm Colony Capital, which supported him last year when he refinanced debts that had been held by the Irish Bank Resolution Corporation. Colony is not putting pressure on him to sell, it is understood.

The Abu Dhabians have had a long-standing interest in the hotels and were frequently mentioned during a court case between the Barclays and Mr McKillen in 2012.

In its letter a fortnight ago, the Abu Dhabi fund indicated it would be willing to settle for a majority stake in Maybourne, with McKillen holding a minority interest – an acceptance that the Irishman is not prepared to leave the scene.

The issue is whether or not the Barclays – who also own the Ritz Hotel – wish to depart the scene, following years of legal battles with Mr McKillen, though the valuation put on the hotels reflects London’s rising property values.

A source quoted by the Sunday Times said: “[The Abu Dhabi fund] is just trying to see where the land lies with the shareholders because there’s no love lost between the Barclays and McKillen. It has given everyone something to think about.”