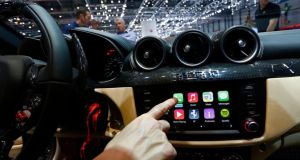 Apple’s CarPlay system is seen in the touchscreen console of a Ferrari FF automobile, produced by Ferrari SpA, as it stands on display at the company’s stand on day two of the 84th Geneva International Motor Show in Geneva, Switzerland

Smart phone apps abound for the car driver. On a quick browse of my app store, I found apps for route planning and traffic jam avoidance; car sharing; finding free parking spaces; finding the nearest and cheapest petrol stations; warning of speed traps; trip analysis, including CO2 emissions; on board diagnosis of engine performance; and even g-force indicators of acceleration and cornering. Some of these apps are applicable before and after a trip. But many are targeted for in-vehicle use, and so raise safety concerns.

Last month, Ireland raised the number of penalty points for driving whilst (just simply) holding a mobile phone, from two to three points on payment of a fixed fine, and from four to five upon a conviction.

Meanwhile in several states across the US, Google is lobbying hard to try and prevent its new Glass augmented spectacles being outlawed whilst driving. A judge in San Diego recently dismissed a case against a driver who admitted wearing one at the wheel, because there was not proof she was actually using it at the time.

Nevertheless, the National Safety Council (the US equivalent of our own Road Safety Authority) is articulately counter-arguing that electronic glasses and phones – even hands-free ones – distract the brain and reduce its ability to register driving cues. They assert that phones are involved in 25 per cent of all vehicle crashes in the US.

Here in Europe, and as reported in The Irish Times , the Geneva Motor Show was held last week. The convergence of high technology with motoring continues and, as one wag noted, cars are evolving into “smart phones with wheels”. One of the talking points of the show was Apple’s announcement with a number of major car brands that its CarPlay technology would be integrated into production vehicles later this year.

Apple’s initiative is significant since it involves more car brands than Google’s January announcement of its Open Automotive Alliance. Although early into the automotive industry with its 1998 AutoPC technology, and now its Windows Embedded Automotive, Microsoft appears to have been overtaken.

Apple’s CarPlay enables drivers to control music, interact with maps, and send and receive messages, either by using the car manufacturer’s native interface, or by using Apple’s Siri voice-activated personal assistant. The US NSC very rapidly responded expressing deep concern about the potential distraction which CarPlay may pose to a driver.

I wonder how practical Siri can be for the first CarPlay production vehicles later this year? Siri for CarPlay will of course require a reasonable mobile broadband connection, which all too frequently is not the case and particularly so in some rural areas.

Even with a good broadband connection Siri is currently slow, and takes several seconds to respond. Mercedes-Benz has posted a YouTube video showing off CarPlay in a (stationary) C-Class vehicle, but the interface appears horribly awkward and a little absurd.

Driverless driving
Beyond CarPlay and its competitors, the ultimate high tech objective is driverless driving. One can muse about whether robots will replace the Top Gear presenters. Nevertheless, fully automatic driving has been demonstrated not only by the pioneering work of Google, but now also by Mercedes-Benz (over the historic, first-ever long-distance drive, in 1888 by Mrs Bertha Benz), BMW, Audi, Toyota and others.

At the Geneva show last week, the Swiss think-tank Rinspeed showcased a Tesla Model S refurbished with fully reclining seats, and which also can swivel to face backwards, enabling face-to-face conversations with the back passengers.

Fully autonomous vehicles are probably a few years away yet. But in the interim, partial autonomous technology is rapidly appearing in today’s vehicles. Several car manufacturers now offer some form of autonomous parking. Some of Nissan’s cars now automatically correct for poor steering around corners. A Volkswagen Passat can gently automatically steer itself back if you start wandering outside a designated lane. Volkswagen Audis can include a radar option which automatically detects other vehicles and manages cruise control so as to always keep a safe distance.

Whatever about such technology advances, the necessary global regulatory and legal innovation will inevitably be more cautious. If a crash nevertheless occurs whilst a car is automatically compensating for poor driving, will the human driver or the machine be at fault?

When a fully autonomous car is involved in a serious accident, will the driver who was watching a film at the time, or the car manufacturer, be responsible? What if the autonomous car were in fact empty at the time, driving itself to pick up pre-arranged passengers ? The (inevitable) first major accident involving a driverless car will be a challenging PR incident for both the high tech and automotive industries.

Ford closed its car factory in Cork back in July 1984. Today, Ireland is already host to all the major high technology firms which are targeting the car industry. The Science Foundation Ireland funded LERO initiative in Limerick includes software research on smart and autonomous vehicles.

There may well be an opportunity for Ireland to become a global centre for testing and adopting hybrid and even fully autonomous vehicles, if we could take a strategic initiative in our regulatory, insurance and legal frameworks.