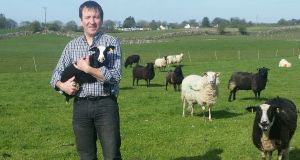 Michael Flanagan: “We believe these products will appeal to consumers looking for foods that address concerns around digestive health, food intolerances and clean eating”

How do you milk a sheep? “With great care and attention,” says Michael Flanagan founder of Rockfield Dairy, a new Mayo-based company producing sheep’s milk and sheep’s milk yogurt under the Velvet Cloud brand.

“We are the only producers of these products and believe they will appeal to consumers looking for foods that address concerns around digestive health, food intolerances and clean eating,” Flanagan says.

“Many people who are lactose intolerant find they can digest sheep dairy products. They have substantially higher naturally occurring levels of protein than cow or goat’s milk as well as greater amounts of calcium and essential vitamins.”

Flanagan grew up on a traditional dairy farm in the West of Ireland but was always intrigued by sheep dairying. “I noticed it was common in France, Italy, Spain and almost all of southern Europe,” he says.

“It was also becoming established in both the UK and in New Zealand where a lot of investment has gone into the industry over the last 10 years. So I thought, why not Ireland ?”

Flanagan has spent over two decades working in operations, finance and business development roles in the IT and food industries with companies such as Glanbia and Hewlett-Packard. His wife, Aisling, also has a long track record in the food sector having previously worked with Bord Bia and HJ Heinz.

The couple’s farm is home to a herd of 150 Friesland and Lacaune sheep and Flanagan says they behave pretty much like dairy cows. The milking technology is also similar.

Velvet Cloud’s start-up costs were in the order of €100,000 and the funding is a combination of personal investment, a feasibility study grant from Enterprise Ireland and support from the Mayo Local Enterprise Office.

“I think our timing is good as retailers want to increase the shelf space devoted to speciality dairy products while the unique and nutritious properties of sheep’s milk also fit right in with the current trend for clean eating, recovery foods and ‘free-from’ products,” says Flanagan.

“We are also providing the food service sector with a consistent, high quality product. For them it is a new way of enhancing their menus with a versatile product with proven provenance and excellent taste and mouth-feel credentials.”

Velvet Cloud is now nine months on the market and the company has already had approaches from the UK and the UAE. The company has serious export ambitions and a product pipeline that will include fruit yogurts and a Pyrenees-style sheep’s cheese in the short term. It is also looking at entering the Asian market where there is growing demand for ultra-premium infant formula. This niche is being exploited by New Zealand and Flanagan sees no reason why Ireland shouldn’t have a slice of the action.

Prior to launch, the Flanagans put a lot of time and investment into market research and developing a strong brand and packaging. They used social media channels to get endorsements from industry advocates including Michelin-starred chefs, wellness experts and speciality retailers.

“Within six months of launch we had agreed commercial partnerships with Ireland’s largest distributor to health food stores and with a leading high end specialty food service distributor.

“We’ve listings in over 40 retail outlets (including 20 SuperValus) and Velvet Cloud features on the menus of three Michelin-starred restaurants,” Flanagan says.

“For sales development we’re taking the direct approach,” he adds. “We visit and open every new account ourselves before handing over to our distributors. We believe this is the only way to develop long-term commercial relationships with customers.”