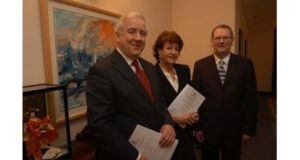 The portfolios managed by the agency responsible for national debt and the State pension fund increased by 14 per cent to €57 billion in 2005.

The National Treasury Management Agency (NTMA) said yesterday that its debt and asset portfolios exceeded €57 billion this year and that the State is €5 billion better off than it expected to be a year ago.

Agency chief executive, Dr Michael Somers, said yesterday that the exchequer had a surplus of €435 million.

However, he said that the Department of Finance was predicting a deficit of €660 million for the year, which increases the national debt to €38.5 billion.

The near 31 per cent increase was a record for the National Pensions Reserve Fund (NPRF).

The agency explained yesterday that the strong rally in world equity markets drove the increase. The fund earned a return on its investments of €2.3 billion, or 19.2 per cent. It now holds shares in almost 1,800 quoted companies worldwide and €12 billion, or 78.5 per cent of the total fund, was held in equities yesterday.

The next biggest component was government bonds, which accounted for €1.8 billion, or 11.8 per cent of the total. Cash made up €1.15 billion while private equity, property and commodities made up the rest.

The fund engaged in a shift in strategy during the year, and has begun to invest more in private equities and property.

The agency said yesterday that €630 million was invested in global equity markets.

The NPRF is due to issue its own 2005 review shortly.

Dr Somers said he had no real explanation for the the €1.1 billion difference between the NTMA's calculation of a €435 million surplus and the Department of Finance prediction that there would be a shortfall of €660 million. He said it was possible that the department would have written cheques to cover the 2006 budgets of other Government departments yesterday, and said that this could account for the difference. The department is due to hold its publish its own end-of-year returns next week.

Dr Somers did point out that a €660 million borrowing requirement predicted by the Department of Finance was far short of the €3 billion estimated in the 2005 Budget.

"The State's balance sheet continues to improve," he said. "The total debt liability is now equal to just six months worth of tax revenues, when we started 15 years ago, it took three months just to cover the the interest bill."

As all the liabilities are in euros, the State faces no exchange risk. Dr Somers also said that 84 per cent of the national debt carried a fixed interest bill of just 3.5 per cent.

"We have squeezed down the cost of the debt and are continuing to do so," he said. The Republic has one of the highest credit ratings of any country in the world, he added.