Move over Generation X, millennials are the new target of marketers 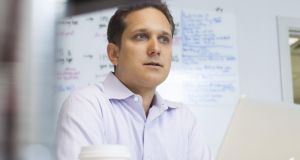 Jason Dorsey, the founder of the Center of Generational Kinetics, a marketing research firm in Texas. “Definitely we want to be inclusive of millennials, but we don’t want to forget the people who brought us to the dance.” Photograph: Ben Sklar/The New York Times

The makers of Tic Tacs had a problem on their hands.

After 18 months of internal study, they had concluded that the all-important millennial generation might not be content with a mere mint.

No, the millennials wanted entertainment, release from boredom, “emotional rescue”.

So this month, a new and more amusing Tic Tac is coming to store shelves – the Tic Tac Mixer, which changes flavours as it melts on the tongue. From cherry to cola, for example, or from peach to lemonade.

It’s yet another play in the millennial mania that is overtaking all manner of businesses and seems to be getting more obsessive by the day. Not since the baby boomers came of age has a generation been the target of such fixation.

But this has a 21st-century style of urgency – with 24/7 micro-pandering, psychographic analysis, a high-priced shadow industry of consultants and study after study. (A few from recent days: how luxury brands can connect with millennials; what millennials think about restaurant loyalty programmes; and which emotions most influence the purchasing decisions of millennials. Answer: anxiety and empowerment.)

All cater to a generation, generally viewed as people born from about 1980 to 2000, whose youngest members aren’t even out of their teenage years.

Goldman Sachs has gone as far as to research what (older) millennials are naming their babies. GameStop, a leading purveyor of video games, promotes its “insider knowledge” of the generation. Even coffee – an industry that would seem to have the generation in the bag – is frothing.

“The reality is that Gen M-ers drink more specialty coffee than any other generation,” wrote Heather Ward, a research analyst. “As specialty coffee professionals, how do we make sure we are giving them the attention they need?” she continued in a paper prepared for the Specialty Coffee Association of America.

But some analysts and consumers have begun to ask, what about the rest of us? After all, the millennial generation has less wealth and more debt than other generations did at the same age, thanks to student loans and the lingering effects of the deep recession.

Although millennials are hailed as the first generation of “digital natives”, the over-40 (and 50 and 60) sets have become pretty adept when it comes to smartphones and other devices.

Still, this most coveted generation is huge – about 80 million strong in the United States, larger than any other demographic group. And it recently crossed a milestone: as of March, there are more millennials in the US workforce than Generation Xers or baby boomers, according to the Pew Research Center.

The consulting firm Accenture estimates that millennials will spend $1.4 trillion (€1.25 trillion) annually by 2020, and they are expected to inherit about $30 billion (€26.8 billion) in the coming years.

“Why you’re seeing the fervour now is just where millennials are headed – out from the younger part of their life stage to where they’re in their first profession, they’re getting married, having children and influencing more spending,” said Christine Barton, a senior partner and managing director at the Boston Consulting Group.

As a result, businesses are terrified that if they don’t snare them now, they’ll miss the chance.

Last month, Whole Foods revealed that it would open a line of grocery stores “geared to millennial shoppers”, with a “curated selection”, “streamlined design” and “innovative technology”.

Not to mention lower prices.

The news media reported the development earnestly. But some people noted that better deals on quality produce might have a cross-generational appeal.

Robyn Bolton, a partner at Innosight, a consulting firm, responded in a post on the Harvard Business Review website questioning the generational theme.

Whole Foods, she wrote, appeared to be saying that “Gen X and baby boomer shoppers are fine with or even prefer old, cluttered stores that sell a confusing array of stuff at high prices”.

Ravi Dhar, the director of the Centre for Customer Insights at the Yale School of Management, said the attributes that businesses were ascribing to millennials – including a dependence on technology – applied to the population as a whole.

“How people shop and consume information, that’s really changing beyond the millennials,” he said.

This month, the market research firm Forrester issued a report titled: The Kids Are Overrated: Don’t Worry About the Millennials. It noted that consumers in their 20s were overwhelmed with educational debt and that those baby boomers were more affluent and bigger spenders, unhip though they may be.

“While some businesses must target millennials because of the nature of their products, most do not need to,” the report said. “When such companies do pine for 20-somethings, they resemble the desperation of a nerdy teenager who, smitten with a prom queen, forlornly asks, ‘Why doesn’t she love me back?’ ”

Last month, Brittany Nicole Miller celebrated her 29th birthday. Her age makes her the target of much of the corporate affection, a fact that she says she has experienced “ad nauseam”.

Miller, who is also known as Piper, is divorced and works as a massage therapist and a model. She lives with two male roommates (who are not a couple) in a rented townhome in Danville, California, in the East Bay. She used Twitter to complain to Sprint when she had a problem with her phone (it worked), and she likes to buy vintage clothes and accessories.

In some ways, she is a stereotypical millennial; in others, she is not.

“It can be a little overboard, the generalising,” she said.

Jason Dorsey, who at 36 considers himself among the older millennials, founded the Center for Generational Kinetics in Austin, Texas, five years ago and is often invited to speak about his generation at conferences and events. The centre, which advises corporate clients in many industries, focuses its research efforts on “generational context,” he said, “not generational silos”.

Really, he and others say, millennials, especially their dependence on technology, are probably just a leading indicator of where life is headed for everyone.

“Being able to text message with a company we found is something every generation wanted to do even though we assumed it was just millennials,” he said.

“Definitely we want to be inclusive of millennials, “ he added, “but we don’t want to forget the people who brought us to the dance.” – (New York Times service)