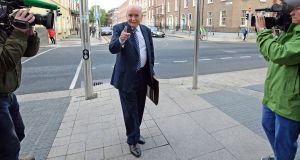 In his court action, Michael Fingleton argues the inquiry is disproportionate, oppressive and unreasonable and breaches his rights to fair procedures and a fair hearing. Photograph: Eric Luke/The Irish Times

Mr Fingleton and several other former officials of INBS are subject of a Central Bank inquiry, initiated under the 1942 Central Bank Act, which is due to commence hearings in February 2016.

The Central Bank wants to inquire into allegations that certain prescribed contraventions were committed by both INBS and certain persons concerned with its management, between August 2004 and September 2008.

In his High Court proceedings, Mr Fingleton, who retired in 2010, argues the inquiry is disproportionate, oppressive and unreasonable and breaches his rights to fair procedures and a fair hearing.

Represented by Bill Shipsey SC, and Francis Kieran, Mr Fingleton argues the Central Bank cannot conduct an inquiry of this nature on grounds including that Mr Fingleton is no longer involved in the management of an entity that was a regulated financial service provider.

Mr Fingleton is also subject of proceedings before the Commercial Court, yet to be heard, which also arise from events at INBS before it was nationalised in 2011. Mr Fingleton claims, at the very least, the inquiry should not be conducted until those proceedings have concluded.

The Central Bank opposes the application and argues it is entitled to proceed with the inquiry.

The action before Mr Justice Seamus Noonan continues and is expected to last for a number of days.