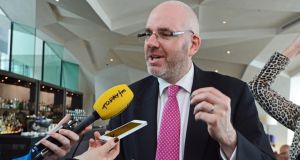 UTV Media’s warning during the week concerning the performance of its new UTV Ireland television station – the third in six months – deftly illustrated the cut-throat environment for mainstream media. Here’s hoping the staff and journalists there turn it around.

That solidarity, however, doesn’t mean we can’t tweek the noses of their bosses. Michael Wilson, the UTV executive who oh-so-ebulliently fronted the launch, reveals on his blog he is a fan of the early Hollywood horror actor, Bela Lugosi, who played the first Count Dracula in 1931.

I wonder which are his favourite Lugosi flicks? What about Murder By Television (1935)? Or maybe Genius At Work (1946). Personally, I prefer his 1924 film, He Who Gets Slapped.

1 Remote working doesn’t suit everyone, and it exposes woolly leadership
2 If you think governments are spending money now, just wait
3 Coronavirus: Construction sector most significant part of new shutdown
4 British exceptionalism backfires in style as Johnson tests positive for coronavirus
5 Dublin software company Workhuman ‘on course’ for €1bn valuation
6 Can husband keep savings and half the house in divorce?
7 Volkswagen burning through €2bn in cash per week
8 Will Covid-19 force Primark to rethink decision not to sell online?
9 Wetherspoon’s panto-villain chairman may have the last laugh
10 Pensions crisis in Europe
Real news has value SUBSCRIBE