UTV Ireland gets out and about for debut news bulletin 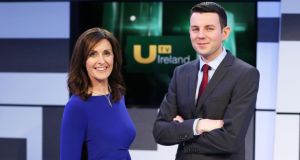 “Well, Mary, this all sounds like the opening salvo of an election campaign,” mused Ireland Live anchor Alison Comyn in a two-way with UTV Ireland’s engaging political editor Mary Regan, stationed on an unexpectedly hazardous corner near Government Buildings.

Regan’s eyebrows flew up as she agreed that party wrangling over the latest economic figures was a “taster” of a general election, albeit one not scheduled for another 14 months.

UTV Ireland would surely love an election to be called sooner, as it would give its news and current affairs team the opportunity to make its mark. As it is, the debut editions of the 6.30pm bulletin Ireland Live and Ireland Live at 10 represented a solid start.

In fact, they were better than solid – they were interesting. Even a pre-prepared report on cycling safety – a news perennial – was well executed.

The programmes were not nerve-free, and not without minor technical flaws but nothing could be said to have gone wrong either. A honking white van skirting the kerb behind an unfazed Regan was as close as it came to disaster – it’s not just cyclists, it seems, who take their life in their hands.

Of course, it is unfair to judge UTV Ireland’s news strength on its first day. Nevertheless, some things are immediately apparent. The first is that experienced presenter Comyn is an assured, watchable presence, who can now add Believable Tapping on Tablet with Stylus Pen to her CV.

Chris Donoghue, who joined Comyn as co-anchor for the more in-depth late news hour, has been described by his Newstalk boss Gerard Whelan as “a high-adrenalin guy”. His performance was more understated than that sounds.

Perhaps what was most striking is that UTV meant it when it said it planned to get around a bit. The first bulletin featured live links to its Cork and Limerick studios as well as Merrion Street, with other reports doing something of a tour of the regions.

The set, described by UTV as “modular”, resembles a series of illuminated, low-rise Jenga blocks and it looks great. Behind a partially frosted screen, the backdrop lends flashes of yellow to the colour scheme. Unlike the fake newsroom backdrop used on RTÉ News, this is the actual UTV newsroom but sadly, no, no staff could be spotted picking their noses or doing the conga.

The 6.30pm bulletin overlaps with RTÉ’s Six One News which unsurprisingly gave more time to international stories, with contributions from both Washington correspondent Caitriona Perry in Boston and new London correspondent Fiona Mitchell outside Buckingham Palace.

Both RTÉ and TV3’s The 5.30 bulletin led on hospital overcrowding, which was third on UTV’s running order on its first programme. But by 10pm, the developing story had been promoted to its lead item.

In some canny timing, just as Ireland Live was about to go on air, RTÉ trailed a live in-studio chat with Minister for Finance Michael Noonan. Naturally, Noonan popped up on TV3 and UTV Ireland too.

On the evidence of its first day UTV Ireland, under head of news Marcus Lehnen and news editor Mick McCaffrey, probably won’t attempt anything too quirky or tabloid. The question arises, then, as to whether its coverage can stand out from the competition.

Whatever the answer, it looks set to be a busy 2015 for Government ministers and television news reporters alike.