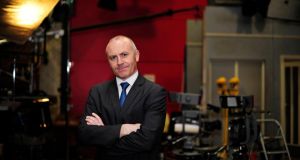 RTÉ Television managing director Glen Killane: “The only thing that’s dragged me away from RTÉ is House of Cards.” Photograph: Aidan Crawley

Tomorrow is World Television Day and the blurb for the industry initiative doesn’t hold back: The medium, as well as being “a cornerstone of democracy” and “a wonderful ambassador for the entertainment industry”, also provides viewers with “an avenue of dreams”.

So, other than the output he oversees, what is RTÉ Television managing director Glen Killane watching at the moment then? “The only thing that’s dragged me away from RTÉ is House of Cards on Netflix, ” he says. “And Gogglebox has been great as well. Everyone in the television business watches Gogglebox.”

He mentions TV3’s forthcoming version of the show, in which ordinary members of the public are filmed giving their reactions to the week’s television and invariably slag it off in blunt and colourful terms. So he’s not worried that the TV3 Gogglebox will eviscerate RTÉ shows then? “There’s no such thing as bad publicity,” he says. He is used to the immediate public feedback on Twitter anyway.

There is, Killane says, “an awful lot of talk about the demise of television”, but people are just consuming television in different ways. “The challenge now is to measure the true appeal of a show.”

If it can’t measure the “true appeal” in the era of digital consumption, it can’t sell advertising on the basis of it. So the RTÉ audience analytics department has been tasked with coming up with a “total screen rating” measurement that tots up all the different ways a show can be viewed.

On paper, it sounds like a simple sum – just add the total number of RTÉ Player streams to the Television Audience Measurement Ireland/Nielsen’s consolidated ratings figure (which counts any digital video recorder playback that occurs within seven days of broadcast).

One issue is that people often don’t consume the full programme when they hit “play”, so a single view may end up generating multiple streams.

However, ITV is “on the cusp of saying a view is a view”, he notes, and he doesn’t think the industry should “over-complicate” these things.

By any measure, few things RTÉ has produced in recent years have been as popular as Love/Hate, the gangster drama that wrapped up its fifth series with a strange degree of confusion about whether it is coming back for more - its return dependent, apaprently, on negotiations with creator Stuart Carolan and producers Octagon Films. Eventually, it was confirmed that there would be a further instalment, but that it won’t air in 2015.

Killane, speaking ahead of that announcement, indicated that it “if it was completely up to me”, the show would “absolutely” be back. “For me, what Love/Hate has done for us is it brings the family round the television on a Sunday night. Okay, it isn’t Little House on the Prairie, but it is incredibly gripping drama, Irish through and through.”

How much is its stellar ratings performance worth to RTÉ? He declines to specify, saying only that the television sales team have been “very successful” in packaging their advertising offers around Love/Hate. Its track record also brought in a sponsor in the shape of Eircom for its Sunday-night dramas, a deal that also includes The Fall and Charlie, which will be shown in early January.

If Love/Hate does indeed air in 2016, a six-episode run could be prohibitively expensive. The year is already looking cost-heavy; with an Easter Rising-themed drama, the Rio de Janeiro Olympics and the Uefa Euro 2016 football finals in France all set to burn a hole in its programming budget.

“Budgets are very, very challenged and it is a struggle every year but we are looking at every single thing that we do to make sure every cent goes on screen.”

In 2013, RTÉ Television spent €90 million on in-house-produced programmes, €40 million on commissions from the independent sector and €23 million on acquired programming.

“That’s a lot of money, but it’s not a lot when you look at the competition we’re facing,” says Killane.

“The BBC drama budget alone is bigger than the entire amount that we spend.”

There is scope to make a higher volume of shows, he adds. More co-productions with British broadcasters as well as more advertiser-funded series are in the pipeline. But even Love/Hate is not immune to budgetary pressures.

One casualty of the squeeze is Morning Edition. The axe has fallen on the current affairs show after just two years on air.

Today, the afternoon magazine show, broadcast from RTÉ’s Cork studios, survives because of its commercial partnerships. “It’s not fully funded by advertisers, but it is heavily funded by them, and that is the only reason that show is on air.”

What the Gogglebox-ers think of it and the rest of RTÉ’s schedule remains, literally, to be seen.

1 Belgium helps Ireland to a Brexit boon
2 ‘My rent here is so low it’s a joke’
3 New Powerscourt Springs hotel to open in defiance of virus gloom
4 Can Grafton Street stop the flood of closures?
5 This charming man: how Paschal Donohoe won the Eurogroup presidency
6 AIB to compensate another 1,100 tracker mortgage holders
7 Goodbody loses a second suitor as Bank of China deal falls through
8 Bank of Ireland launches €200,000 prize fund
9 Thousands of AIB customers to receive refunds following decision on tracker case
10 How to . . . move (almost) everything to your new phone
Real news has value SUBSCRIBE