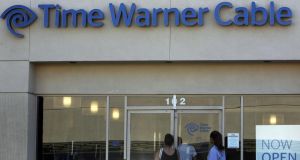 The proposal included about $83 cash per share and about $49.50 in stock, according to Charter.

Excluding debt, the deal would be worth about $37.3 billion.

Charter, backed by billionaire John Malone, is seeking to create a provider of TV, Internet and phone service for about 20 million subscribers in 38 states.

The combined company would be the third-largest pay-TV operator by customers - behind Comcast and DirecTV - helping it generate cost savings and negotiate better programming deals.

“Our objective was to talk to management and try to get them engaged. They have not, so we’re going to make our case to shareholders about why this deal is good for them and hope they ask management and the board to watch out for the interests of shareholders.”

Charter sent a letter to Mr Marcus yesterday explaining why the company’s offer is beneficial for shareholders.

Time Warner Cable’s board rejected Charter’s offer, calling it “grossly inadequate,” according to a statement yesterday.

“Here’s what happened: We didn’t put our house up for sale, and we got a knock on the door and someone made a low-ball offer,” Mr Marcus said in an interview.

“They want a premium asset at a bargain-basement price, and that’s just not going to happen.”

Time Warner Cable probably won’t accept an offer less than around $150 per share, Christopher King, a Baltimore-based analyst with Stifel Nicolaus and Co, wrote in a note to clients.

It has climbed about 40 per cent since June on renewed speculation of cable-industry mergers.

Mr Rutledge and Charter chief financial officer Chris Winfrey met with Marcus and Time Warner Cable CFO Artie Minson in December to walk through details of the offer, including structure, financing, tax and cash flow implications, according to the letter.

Charter indicated its willingness then to submit a proposal at the low $130-a-share level, including a cash component of $83 a share.