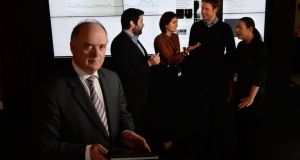 On Monday, The Irish Times will launch new digital subscription packages, and Liam Kavanagh, managing director of The Irish Times Ltd, believes the timing is right to ask readers for “what we think is a modest amount of money” for full, unrestricted online access.

“There is an increasing acceptance now that digital content needs to be paid for. The consumption patterns for television, music and the written word confirm that. We have all become more used to subscribing to services,” Mr Kavanagh says.

“We need to build our content-led digital revenues, because we don’t think advertising on its own is sufficient to pay for the amount of content that is generated by The Irish Times – by its 180 staff journalists and its contributors – on a day-to-day basis.”

From February 23rd, readers will be able to access up to 10 articles per week on any one computer or device before they are invited to subscribe. Prices of the packages, details of which were published on Tuesday, start at €12 per month.

“This service is really targeted at 15 per cent of the online readership: the heavy and frequent users. They are currently consuming a lot of content for free, but it’s an unsustainable business model.”

The site attracted 6.1 million monthly unique visitors in January, generating 44.5 million page views, but the number of readers classed as “monthly engaged users” is estimated to be 150,000. It is from this pool that the company hopes to attract new subscribers.

The Irish Times currently has 20,000 subscribers. The majority of these – about 13,000 – pay for home delivery of the newspaper, while about 4,000 subscribe to the epaper and the remainder to other services such as the online archive or digital crosswords.

By launching digital subscription packages and combined digital and print bundles (where home delivery is available), the company hopes to double its total number of subscribers to 40,000 in the first year.

“This has been a two-year project and it is transformational for us,” says Mr Kavanagh. “More than ever before, we have to think about the reader as a customer and how best we serve them. Historically, newspaper organisations printed their papers overnight, delivered them to newsagents and just expected the customer to come in and pick them up.”

Now, instead of building relationships with 4,000 newsagent-customers, the company plans to be able to communicate directly with 40,000 reader-customers. This has required new expertise in areas such as web analytics, research and customer care.

“We have had to make a significant investment in our infrastructure to do this, adding new technology platforms and new skills, both editorially and in sales,” Mr Kavanagh says.

“Our first challenge now is to build the subscriber base. The second is to keep those subscribers. The international experience is that churn rates are very high; the challenge is to minimise that churn. The third task then is to grow our digital revenues by adding to our subscriber base.”

Digital revenues currently account for about 12.5 per cent of the turnover of The Irish Times and “over the passage of time”, he expects this to double.

The overall trend for print circulation is one of decline, but the move to introduce new subscription packages may support print sales, rather than diminish them.

“We will now be selling print in a way that we haven’t done previously, which is to bundle it with digital. Our research tells us that there is a significant crossover between our print and digital readers,” Mr Kavanagh says.

The company’s new digital business model – often referred to as a “metered” or “leaky” paywall – is expected to prompt a temporary fall in traffic to irishtimes.com as previously heavy users opt not to subscribe, but to seek their news fix elsewhere.

“There is likely to be a traffic impact, but we think we can get it back into growth mode again reasonably quickly because we are still expanding what we do on the site,” Mr Kavanagh says. Digital is “no longer an add-on” but is “at the heart of how we operate”, he says.

The Irish Times has added 25 journalists over the past two years, with some of these new employees involved in relatively new areas for the company such as video, audio and data journalism.

“I would hope that you would see that investment in journalism continuing, to make the experience richer and broader and deeper,” says Mr Kavanagh.

The launch of the digital subscription packages are “a first step”, he says. “These are the foundations for what we are trying to do. It is our first foray into content-led digital revenues. It is not the silver bullet in terms of solving the problems of the newspaper industry, but it is part of the solution for The Irish Times.”

Are there annual limits on inheritances or gifts to a child? 05:40
Stocktake: Skyrocketing Tesla may drive ‘mother of all short squeezes’ 05:40
Big stocks are dominating like never before 05:40
Bullish sentiment hits extreme levels among investors 05:30
Health insurance: Switch often for your financial wellbeing 05:16
Search executive
jobs on irishtimes.com