Revenues at the media group are running down 2.8%, as advertising and circulation declines 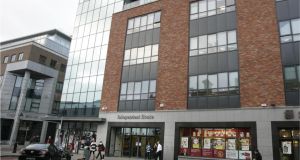 Independent House. Revenues at INM fell almost 3 per cent in the first part of 2014, with both advertising and circulation income dropping over the period.

Independent News & Media (INM) will be managed by a sub-committee of its board of directors until a new chief executive is found, the group said yesterday.

Leslie Buckley is a long-term business associate of INM’s largest shareholder, Denis O’Brien. Ms Mullane, Mr Marshall and Terry Buckley were each appointed to the board of the company between June and December 2012.

The search for a replacement chief executive is “ongoing”, INM said.

Revenues at INM fell almost 3 per cent in the first part of 2014, with both advertising and circulation income dropping over the period.

In a trading update to investors, the media group said total revenues declined 2.8 per cent between January 1st and May 16th compared to the same period last year.

Digital advertising revenues increased 17.8 per cent, however, and despite a “substantial investment in digital activities”, operating costs were trimmed by 2.8 per cent.

The group signalled that trading conditions have improved since the announcement of its 2013 full-year results in mid-March.

“The reduction in newspaper advertising revenue year-to-date is primarily related to the performance of our Northern Irish operations, with the Republic of Ireland newspaper business showing a year-to-date decline of 1 per cent.”

The surge in digital revenues, which has also accelerated since March, is “principally due to strong growth in our digital publishing operations, together with our Northern Ireland classifieds business”, it said. The company’s discount deals platform, GrabOne, has showed “marginal” year-to-date growth.

The group said the impact on profitability of both declining revenues and digital investment has been largely mitigated by the financial benefits of its two cost-cutting programmes, this year’s €9 million “Project Quantum”, which is targeting production and sub-editing costs, and last year’s larger €26 million exercise, code-named “Project Resolute”.