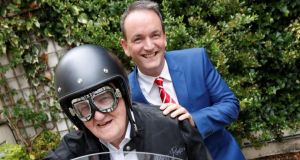 Fortunes in the drivetime market have shifted gear a little over the past year, with RTÉ Radio 1’s Drivetime and Today FM’s The Last Word with Matt Cooper losing 9-10 per cent of their audience.

Now packing a harder punch, however, is George Hook, whose show The Right Hook has edged past The Last Word into second place in the drivetime national market.

Viridian-owned Energia, the sponsor of Pat Kenny’s show on Newstalk since its inception, has now also joined forces with Hook’s (more popular) programme.

The energy provider is putting its name to Hook’s Kick Start Your Business entrepreneurship segment and has built SME “information resource” Energiahub.ie in a bid to swell its 60,000 business customer base.

It is being promoted on-air by Hook as part of a six-month deal.