Stellar results and St Maarten: It’s tough being a Smurfit 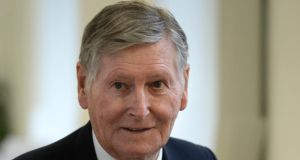 Michael Smurfit: reported to have been seen having dinner on Caribbean island. Photograph: Dara Mac Dónaill

It was a good week for Tony Smurfit, the chief executive of paper and packaging group Smurfit Kappa, who got to present a stellar set of results on Wednesday that made those who engaged in the sell-off of its shares in recent weeks look rather silly.

It sounds like it was an even better week, however, for his father, Michael Smurfit, who previously occupied the hotseat at the company before his son, with Gary McGann in situ in between.

According to local press, Michael Smurfit was in sunny St Maarten this week with a group of friends.

The report said the millionaire was spotted having dinner in Izi, a famed Italian restaurant on the Caribbean island, with unnamed “family members”.

Mind you, perhaps we should take the report with a pinch of sea salt. It also said he still sails around in the Lady Ann Magee, a 65-metre superyacht that certainly wouldn’t look out of place island-hopping throughout the region.

Smurfit, as he confirmed to the Irish Examiner newspaper in 2014, sold the Lady Ann Magee during the recession to Hong Kong property billionaire Joseph Lau.

Lau renamed the yacht the Lady Lau, but he too, has since sold it on for a reputed €40 million to an unnamed buyer. According to Marinetraffic.com, the Lady Lau is currently moored off the coast of Florida.

Whatever transport Smurfit took to St Maarten, you can bet he didn’t travel economy.