Sony Pictures promoting movies on the Telegraph is not surprising

Hollywood adores an ‘integrated solution’, but Oscars tension shows it losing its touch 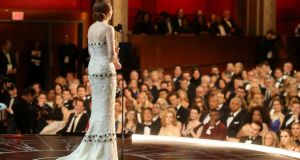 Julianne Moore accepts her Academy Award. ‘Political acceptance speeches are supposed to be the anomalies that keep the ceremony honest. They’re not supposed to define the night.’ Photograph: Christopher Polk/Getty Images

Of all the details to emerge about blurred lines at the Daily Telegraph, perhaps the least surprising is the leaking of a memo from film distributor Sony Pictures praising its unique “integrated solution” for promoting movies that “genuinely works in editorial and paid-for activity”.

Its “partnership” on Brad Pitt flick Fury, the Sony executive unhelpfully suggested, included “support across editorial” as part of the deal, much like the opportunity to despair at all human life now comes free with most multiplex visits.

Whatever has gone awry at that newspaper, that the movie business is lurking somewhere backstage is no big reveal. Hollywood adores a good “integrated solution”.

Just look at the Oscars – actually, no, don’t ever look at them, as your eyes will succumb to Academy Awards Stockholm syndrome and you will never again be able to avert your pupils from the trippy mix of ego and message.

People complain about the red-carpet circus, but it’s only inside the Dolby Theatre that the desperation truly begins. And this year the Oscars were a particularly high-insecurity environment – not for the actors, but for the executives.

The telecast is supposed to be the blue-chip event in the industry calendar, the night when Hollywood pretends it isn’t sustained by the half-dozen franchises that do well in China and is, in fact, 60 per cent about artists and their craft, and 40 per cent about golden-age glamour and impenetrable mystique. The Oscars have always been an elaborate promotion of the myth, but its mechanics are now rusting.

Political acceptance speeches are supposed to be the anomalies that keep the ceremony honest. They’re not supposed to define the night. Jokes about the goody-bag-receiving presenters needing armour-plated cars for when the revolution comes shouldn’t attract such nervous laughter from the auditorium. Everybody’s supposed to be cool.

For corporate bosses, this year’s ceremony must have felt awkwardly off-script. It turns out people will notice if pretty much all of the eight Best Picture nominees revolve around male protagonists. It so happens that failing to nominate black female director Ava DuVernay, or any black actor at all, cannot be recovered from. So instead of basking in the self-congratulatory glow of scripted “conscience” moments, Hollywood came off looking like it was in crisis.

The big studio marketing directors will surely be sending another crop of memos in the days ahead, but meanwhile it is back to the day job of marrying paid advertising to editorial content in more prosaic, less glitzy ways. This means perpetuating what’s known as native advertising with all the haste of an Oscar winner tripping up the stage steps.

“The Gone Girl effect: How well do you REALLY know your partner? The shocking tell-tale signs to look out for that reveal your other half is lying to you,” read the headline on MailOnline. “Try not to marry a murderous psychopath,” it quoted a relationship expert – good advice, and also, in this case, a plot spoiler.

It was exactly the kind of article you might expect to find in any cheap-and-cheerful publication: a recycled top-tips piece dressed up with a topical hook. Ironically, recommending people “spot” potential liars by analysing their partners’ body language was exactly the kind of amateur media psychology satirised by writer Gillian Flynn in Gone Girl, but never mind.

This was sponsored content, produced by MailOnline’s native advertising staff alongside a similar slab of awfulness that ran on Metro.co.uk. For distributor 20th Century Fox, it was “the perfect opportunity to editorially place the film at the heart of the websites’ content”.

Who needs journalism? Really, in this context – in 2015 – the idea that someone in the Telegraph felt it was important to bump up the rating on its review of Despicable Me 2 from two to three stars to please its distributor comes across as the quaintest of allegations.

The Gone Girl ads were dubbed a first, though the movie studios hardly have this space to themselves: Netflix did native advertising months earlier, and better, when it paid for NYTimes.com to run a sponsored 1,500-word multimedia piece on female prisoners in the US to promote its series Orange is the New Black.

And that’s another reason for tetchiness in at the Oscars – film has lost creative dignity to television. Everything is not awesome, and there are hacked emails to prove it. So expect more crude tactics as the industry flays about, trying to silence the sound of dissent on Hollywood Hills. Because this year’s integrated solution was not quite seamless enough.