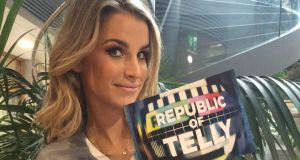 Vogue Williams steps in as ‘Jen of the Week’ on RTÉ Two’s ‘Republic of Telly’. The comedy show’s first Snapchat was an attention-grabbing video of Williams sitting on the toilet.

For the latest – and bravest – in Irish media and marketing digital innovations, look no further than the nominations in the Best Experimental Format category at the Social Media Awards 2015, aka the Sockies.

Awards organiser Damien Mulley invites companies using platforms such as Vine, WhatsApp and Snapchat to put themselves forward for recognition, but the category isn’t limited to those platforms, with this year’s “very creative” nominations also including companies that have made curious use of services from Tinder to UStream.

Image and video messaging app Snapchat is cited by nine of the 14 companies nominated in this category, with both brand marketers and media publishers experimenting with the platform. Among those exploring Snapchat – the company that notoriously turned down a $3 billion takeover offer from Facebook in 2013 – are RTÉ’s Republic of Telly, Aer Lingus, Tayto and Electric Ireland.

The RTÉ Two comedy show’s first Snapchat was a video of model and stand-in presenter Vogue Williams sitting on the toilet – “to grab attention” – and instructing viewers to send in a snap of them watching the show in order to win audience tickets.

Independent.ie, which has been sharing style and entertainment snippets and other bite-sized news on the platform, says it is working towards becoming the first Irish media outlet to be featured in Snapchat’s Discover interface, which gives high prominence to stories from major media partners including Sky News, MTV and Vice.

Music station Spin South West, which found Snapchat was second in usage only to Facebook among its 15-19-year- old listeners, has been running on-air competitions where the clue can be found on Snapchat.

It estimates listener engagement has increased fivefold since its WhatsApp embrace.

Other nominees in the Best Experimental Format category are animal welfare charity Dogs Trust Ireland, which has been nominated for using video service UStream to live- stream footage of one of its carers spending 24 hours in a kennel, and the Immigrant Council of Ireland, which ran a native advertising campaign on dating mobile app Tinder, creating fake profiles that were inspired by real-life stories of girls who were sex-trafficked in Ireland.

The Sockies take place in the RDS Concert Hall on June 3rd and the full list of nominations across all categories can be found on sockies.ie.