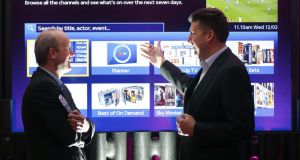 Sky plans to eventually introduce Now TV, its pay-per-view streaming service, to the Irish market. “We think there is a market here for Now TV,” says Mark Deering, Sky Ireland’s director of corporate affairs. However, the company does not have a date in mind for a launch, he adds.

BSkyB launched Now TV, described by one tech site as “semi-skimmed” Sky, in the UK market in 2012. The box itself costs £9.99, and the service then works on a “pay-and-play” basis. A sport “day pass” costs £9.99, a movie “month pass” costs £8.99 and a £4.99-a-month entertainment package gives access to certain Sky TV content, meaning viewers can watch Sky Atlantic shows such as Mad Men and Game of Thrones without taking out a full satellite TV subscription.

Now TV has “gained traction” in the UK, according to Alun Webber, Sky’s managing director of product design and development, who was in Dublin last week to showcase the pay-TV provider’s new homepage.

The company has begun upgrading 8 million Sky+ boxes across the UK and Ireland in what it says is “the most significant shake-up” of its electronic programme guide (EPG) since the launch of digital television in 1998.

The new homepage has the capacity to influence how Sky subscribers consume content via the platform. Tabs for catch-up, on-demand, the Sky+ planner, movie rentals and “new” programming will sit alongside traditional channel listings as equal options, potentially encouraging viewers away from “live” viewing.

Webber, who believes he is “a relatively typical customer” despite his job, says he no longer clicks on the linear channel listings, but goes directly to the “new” tab, which lists every programme on the platform that is within its first four episodes.

Rising usage of on-demand options does not spell the end of live viewing, he stresses, however. “I think people are absolutist if they think one thing means the death of the other.”

But having historically taken the decision to opt into a wider entertainment offering, subscribers to satellite and cable pay-TV packages tend to more readily drift away from linear viewing than viewers who have stuck with basic free-to-air services.

Webber gave a breakdown of how Sky’s customers in the UK and Ireland had consumed the first episode of True Detective . Out of a total of 1.7 million views, just 208,000 occurred as the episode was premiering on Sky Atlantic.

A further 562,000 views took place via playback on Sky+ boxes within seven days, while a repeat of the episode attracted 218,000 views from both live and playback.

The bulk of the total, or some 729,000 views, relate to downloads from Sky’s on-demand menu or on other devices via Sky Go.

Like other television providers and streaming services such as Netflix, Sky has recorded strong growth in on-demand traffic. In the fourth quarter of 2012, its on-demand services in the UK and Ireland attracted 40 million downloads from customers. This increased to 140 million downloads in the same period in 2013.

The company is currently running an advertising campaign, fronted by Luther and The Wire star Idris Elba, for its on-demand “box sets”, which in accordance with the modern usage of the phrase are entirely boxless.